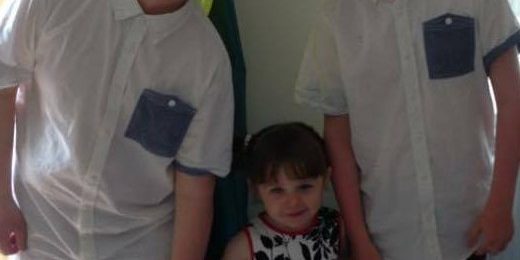 Lisa Senior’s story about a rare type of Mitochondrial disease which has devastated her family, appears in the SUNDAY MIRROR… 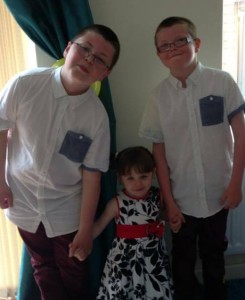 When Lisa and Darren Senior had two gorgeous sons followed by a beautiful daughter, they thought they had the perfect family.

But their world has been blown apart by the shocking discovery that all three children have inherited a deadly illness. It means they will all die before they reach their late teens.

Callum, 14, was the first of their children to fall ill. He was aged ten when his schoolteachers said they believed he might have dyspraxia – often called ‘clumsy child syndrome.’

As dyspraxia is common the couple were not unduly worried. However a year later, in October 2013, Callum’s balance suddenly deteriorated. He began falling over and was constantly exhausted.

Tests revealed he was suffering from a rare type of mitochondrial disease. In nearly every cell in the body Mitochondria are responsible for producing the energy the cell needs to function. When a person has Mitochondria disease the cells are not producing enough energy for the cell to work properly. The commonest parts of the body affected are those that have the highest energy demands – the brain, muscles, liver, heart and kidney. The disease leaves them without the energy they need to function properly. 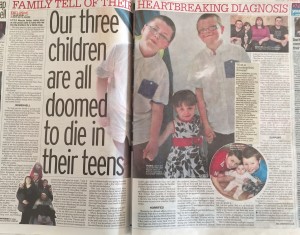 The family in the Sunday Mirror…

And Callum had a rare extremely severe form. Agonisingly both Lisa and Darren’s younger children Jack,13,  and Maycee, four, have also been diagnosed with the same rare condition.

Like his brother, Jack is now confined to a wheelchair while Maycee is already displaying early symptoms such as difficulty concentrating.

The condition has been inherited from Lisa who is a carrier. There is no cure and sufferers are expected to reach the age of 15 to 17.  Lisa cannot have any more children as they would almost certainly be affected.

Lisa and Darren are going through every parent’s worst nightmare and are heartbroken.

Says Lisa:  “You don’t expect as parents that all your children will die before you do – so our world has been blown apart. To know our children are not going to grow up to adulthood, they will not be going to university, getting their first job, buying their first home, getting wed or giving us grandchildren is just too much to bear.

“We are never going to come to terms with it.”

The family have been hugely supported by their local community and are currently raising money to help their children realise their bucket list of dreams and also to raise funds for research into Mitochondrial disease.

Read the full story in the Sunday Mirror.

Since the story appeared in the Sunday Mirror, it has also been placed on Sun Online and Mail Online complete with links to the family”s fund raising page. In addition the family are now set to appear in a top women’s weekly magazine AND they will be appearing on BBC TV…

You can donate and find out more from Lisa’s GoFundme page.

Has a disease devastated your family? If you would like to raise funds and awareness contact me in confidence using the form to the right of this page >>>

Category: Sell my story to the Mirror, Stories sold in 2016, Stories sold to newspapersBy Alison Smith-SquireFebruary 14, 2016
Tags: Health storiesShocking real-life
Share this post
Share with FacebookShare with TwitterShare with PinterestShare with LinkedInShare with WhatsApp