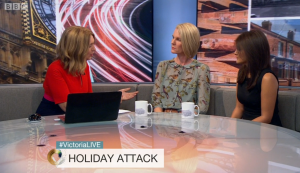 Georgina and Vidisha on the show…

Following publication of her shocking story in The Sun on Sunday and the Daily Mail newspapers, I arranged for Georgina Mortimer to go on BBC’s Victoria Derbyshire show.

Georgina went on the programme with her lawyer Vidisha Joshi of Hodge, Jones and Allen LLP  – and both of them spoke brilliantly.

Georgina, a doctor and mum of two, came to Featureworld after she went on a holiday with the company Girls for Sail and was brutally raped.

She and her lawyer are now suing Girls for Sail and the Royal Yachting Association claiming that security was not tight enough at the Summer Breeze villa in St Lucia  – which the owner of Girls for Sail owns – where Georgina stayed.

Additionally Georgina should have been warned that there has been an ‘epidemic’ of recent rapes on St Lucia, especially as the company specialises in holidays for lone women. Yet Georgina says there was not one single word in the company literature about safety and risks when staying on the island.

Furthermore the way that Georgina was treated by Girls for Sail following the rape compounded her distress – including being sent a voucher for a massage and a mini manicure.

Vidisha said the company had a ‘duty of care’ to guests and they had to consider the location of the property and the personal risks involved.

Georgina revealed to Victoria Derbyshire she was forced to wait an agonising three months before finding out she had not been infected with HIV.

She added: “There was no cctv, there was no security guard, I was not given a key for my room – it was pushed as a place particularly suitable for lone female clients.

“I want people to be aware that it (St Lucia) is a place which which isn’t terribly safe place to visit. I am very unhappy with the way the company dealt with it at the time and since.

“I aim to destigmatise sexual assault. If I speak out then it is helpful for other women.”

Alison’s comment: As such an experienced journalist and media agent, I have been shocked not only by this awful story but by the unprofessional way Girls for Sail dealt with the press. Despite repeated attempts by myself and many others from various newspapers to talk to them they continued their bizarre stance of refusing to discuss anything, simply denying everything.

Girls for Sail have finally only now as the media nightmare unfolded for them, put out a proper statement. This was read out on BBC Victoria Derbyshire, to say they are all in complete shock at the ‘terrible incident’ and this ‘despicable crime’ claiming they are passionate about the well-being of customers and saying they never sought to trivialise Georgina’s horrendous experience.

Meanwhile the Royal Yachting Association, which are also being sued,  continue to distance themselves from all allegations: “Girls for Sail as a company is not endorsed by the RYA.”

Read more about the perils of issuing a ‘no comment’ response

Georgina is now set to be appearing on other TV shows: read about her experience dealing with featureworld

Do you have a story for television? If you would like to get maximum publicity for a story then contact me >>