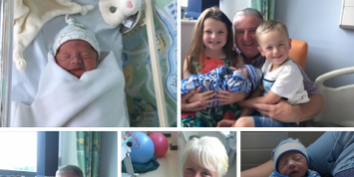 Grandma delivered her own grandchild – story in TAKE A BREAK 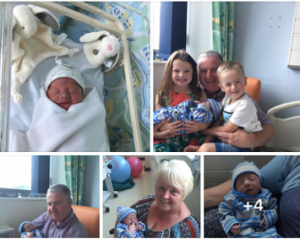 Sarah Frost thought she was suffering from a severe urine infection – but it was a baby…
and her mum delivered her own grandchild
After having her first son Sarah had decided not to have any more children. She had recently split from her son’s dad and with him starting school, was looking forward to getting on with her career.
She had also gone on a diet and lost all her baby weight. So when she began suffering from unexplained backaches and pains, she put it down to a nasty bout of cystitis.
When home remedies didn’t work she went to the doctor who examined her, confirmed she had a severe bladder infection and prescribed strong antibiotics. But that night she woke in terrible pain.
Her worried mum Sue thought the infection might have spread to Sarah’s kidneys decided to take her daughter to hospital.
While waiting to be seen, Sarah went to the loo and her mum came with her. But as she was on the loo she got a huge pain.
Her mum shouted for help but there was no time for doctors or midwives – because it soon became clear Sarah was having a baby and he wasn’t going to wait for anyone. With a couple of pushes little Alfie was delivered into his amazed grandmother’s arms. He weighed 6Ib 12oz and was perfect.
By now the toilet had filled with medical staff who hurriedly brought a wheelchair.
Everyone in the waiting room was amazed when the woman who’d popped to the loo a few minutes earlier came out with a newborn baby…! They were even more amazed when they discovered a grandma delivered her own grandchild.

Unbeknown to Sarah, she had got pregnant before splitting with her ex. With her first son, she’d had a big 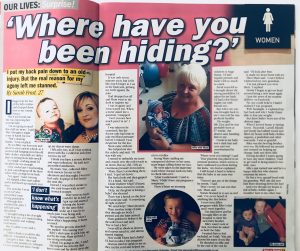 Sarah in Take a Break!

bump and morning sickness but this time there were no signs.  Doctors explained her placenta was in an unusual position which cushioned her from the baby’s kicks, she was also carrying towards her back – hence no obvious bump – and she’d put bleeding during the pregnancy down to periods.

Sarah worried about what she’d eaten and drunk when she was unknowingly pregnant with her son but Alfie is absolutely fine and is adored by everyone. And of course, as he grows up he will have a great birth story to tell about how his grandma delivered him!
Sarah’s delightful story appeared over two pages of Take a Break mag!
Want to sell your story to a magazine, newspaper or TV? Contact me to find out how.
Category: Stories sold in 2017, Take a Break storiesBy Alison Smith-SquireOctober 2, 2017
Tags: Baby stories
Share this post
Share with FacebookShare with TwitterShare with PinterestShare with LinkedInShare with WhatsApp

When ultrasound scan gets the gender WRONG!
July 30, 2018