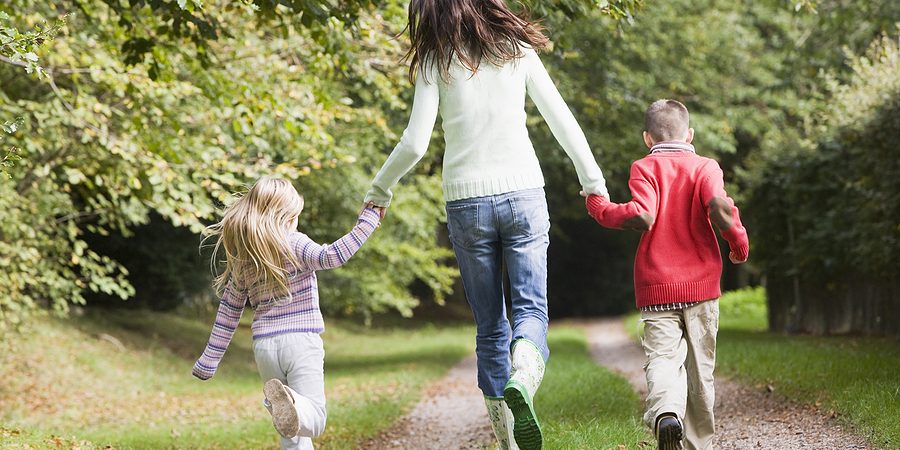 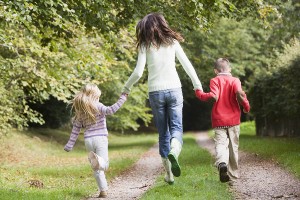 Denise loved being a mum…

Single mum of two Denise Long, 43, came to Featureworld to tell how a split-second decision ruined her life.

Denise, who’d recently split from her kid’s dad, was delighted when she met Brian over the internet.

She was thrilled when Brian invited her and her two children, James and Sophie to the States where he lived for a two week holiday.

The children adored America and she fell head over heels in love with Brian. Unsurprisingly when the time came to leave, none of them wanted to.

As the kids begged her to leave, Denise made the decision not to go to the airport and remained in the States.

Over the next few months Denise married Brian. The kids settled into schools. They adored their big US home.

Life seemed perfect. Yet in hindsight, Denise’s decision to stay was to tear her world apart…

Accused of kidnapping my own kids…

Denise had met the man of her dreams. Only he was in the States. And flying to be with him was to turn everyone’s life upside down…

Clutching my children’s hands I walked into out into the massive Airport Arrivals Hall, Finally I was in the States with the kids. 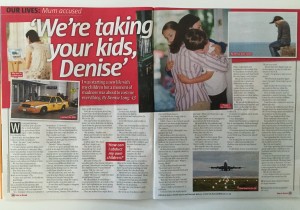 Denise’s story in Take a Break…

As his little sister Sophie beamed with excitement, I searched for Brian. He was the American man I’d fallen in love with over an internet chat room.

Visiting him in Georgia, US, had seemed a dream.

Only yesterday we’d been the drab UK.  A single mum – I’d recently split from the kids’ dad.

Scrimping to save the airfare for our two-week visit had been hard. But I just knew it was going to be worthwhile.

“Denise!” I heard a familiar American drawl calling my name. I looked up and there was Brian, his arms outstretched.

“You sure look great Denise,” he said giving me a massive bear hug, “and who’s this young man and young lady.”

James and Sophie both smiled at him.  “Good to meet ya both,” he said shaking their hands.

Getting into Brian’s great big car, we all stared out of the window at the wide roads as we drove to his home.

“Wow,” said James again as we turned into a long drive. At the end of it was a big ranch like house with a balcony all the way round.

At home the kids and I lived in a cramped two-bedroom house. So the kids could each have a bedroom, I slept on the living room floor.

“Is this your house?” asked James as we lugged our suitcases out of the car.

The next few days whizzed by. The warm weather. The great big garden that swept round the house.

Not to mention Brian. He was everything I ever wanted in a man. Kind, generous.  We had so much in common. The kids loved him. I loved him… 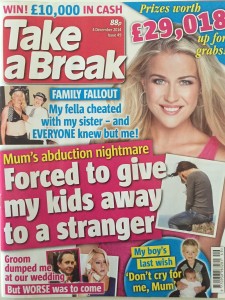 As one week became two I began to dread going home.

“Can we stay here forever?” asked Sophie one day.  We were all sat on the verandah watching the sunset.

Brian turned to me. “Why don’t you stay?” he said, his eyes meeting mine, “I’d love you to stay…”

The kids turned to me. “Say yes mummy,” begged Sophie.

I hesitated. Our flight was booked for late tomorrow. What about their schools, their friends…

“We could go to school here,” said James.

Brian was smiling broadly. “They do American football at school,” he said. I knew James would love that.

They ran to me shouting with delight and gave me a big hug.

It was a moment’s madness but at the same time it felt so right.

I rang their dad and told him. “The kids can still see you for holidays,” I said, “they love it here. It’s going to be a fresh start for them and me.”

From the stony silence on the phone, I knew he wasn’t happy. But as James excitedly told him about our trip, I knew he would understand.

Within days I’d enrolled both kids into school. Sophie had to wait a few months until she was old enough. But James could go straightaway. He loved it.

Meanwhile, one evening Brian took my hand in his.

“I’ve got something for you,” he said. He reached into a pocket and pulled out a diamond and sapphire ring. It was just like Princess Diana’s.

“Let’s get married,” he said and my heart missed a beat.

A month later at the local registry office we tied the knot.

The kids were witnesses.  Standing there as Brian’s wife I’d never felt so happy.

Myself and the kids applied for full immigration to the States.

We moved to be nearer Brian’s family. The three-bed house had an even bigger garden and huge bedrooms for the kids. We even had our own chickens.

Four months went by. It was summer and the kids were both home.

I was washing my hair when the doorbell rang.

Wrapping a towel round my head I went to answer it.

There on the doorstep stood the County Sherriff.

“Denise Long?” he enquired. I nodded. “I’m here to serve you these legal papers Ma’am.”

He thrust a huge wodge of paperwork into my hands.

I shut the door and sat down at the kitchen table. Confused I opened one of the envelopes.

And as I read it I began to feel sick.

I’d broken international laws by taking the kids out of the UK without the proper permissions. Under the Hague Convention, I was being accused of kidnapping my own kids. Worse, their father wanted them returned to him.

I felt the colour drain from my face.

The kids began to cry.

Brian came home from work. “But they can’t make you go back,” he said.

Only it was to be the beginning of a nightmare.

Brian and I saw a lawyer.

“In the light of this, the immigration to the States will need to be withdrawn,” he said, “officially you have overstayed your visa. And the kids will have to go back.”

At a hearing in October I told the judge how happy and settled we all were. Yet it didn’t matter. The ruling was James and Sophie had to return to the UK.

We would have one Christmas here in the States and then on Boxing Day their dad would come to collect them.

I tried to make Christmas as normal as possible. But the next day Brian and I had to drive to the lawyer’s office. As I officially handed the kids over to my lawyer, a virtual stranger to my kids – who was then going to drive them to their dad to fly back with him – I broke down in tears.

Three days later Brian paid for me to fly home.  As I kissed my husband at the airport I wept. Would we ever be together again?

The next day back in the UK I appeared in the High Court. It was then I realised I could lose my children.

A long legal process began. Social services were despatched to do reports. In the meantime ted kids went to live with their dad.

I felt sure James and Sophie would eventually return to live with me. Only I was wrong.

After a custody hearing it was decided they should live with their dad. I ran from the courtroom and was physically sick.

I had lost my kids. I loved being a mum and suddenly they were gone. I missed them so much it felt as if my arms had been cut off.

At the same time not being with Brian was heartbreaking.

I looked into Brian coming to live with me here. But it wasn’t straightforward. He wouldn’t have a job if he left the States, he wouldn’t legally be able to work in the UK. And he would be leaving his family behind.

Then Brian had a heart attack. I longed to care for him, to be wrapped in his big arms again. What if my wonderful husband died and I never saw him again.

Immediately I applied for my Visa to the States it was turned down. Because of what had happened, I was denied entry. Worse I was banned from entering the country for three years.

With Brian too poorly to even visit me, I sank into a chair and cried with sheer frustration. If only on that holiday to the States I’d come home when my flight was booked. If I’d planned my move to the US, sorted out the legal stuff, it would have been different.

I’d never have agreed to stay in America if I’d known missing that flight would have ruined my life.

I am appealing the visa decision on compassionate grounds because Brian needs me.

But I don’t know when I’ll see him or the kids again. I can’t believe a moment’s madness has ruined my life.”

While she couldn’t legally be identified, Denise wanted to get her story published about the Hague Convention and its powers.

If like Denise, you want to tell your story in the media, contact me using the form to the right of this page >>>

Category: Stories sold in 2014, Stories sold to a magazine, Take a Break storiesBy Alison Smith-SquireDecember 6, 2014
Tags: abduction stories
Share this post
Share with FacebookShare with TwitterShare with PinterestShare with LinkedInShare with WhatsApp