The first Monday in January is often dubbed ‘divorce day’ by lawyers as it is one of the busiest times of the year for couples wanting to split.

It’s believed the combination of a long holiday spent together, along with financial stress is often the prompt to filing for divorce as soon as possible.

Jacquie told Woman magazine how she decided to file for divorce after Christmas 2012. Once she’d adored her husband. Now, Christmas had been unbearable with her husband growing distant and resentful of the time she spent with their two sons.

He was off work the whole of December and she found herself walking on eggshells as he found more and more to complain about.

“All around us couples seemed to be thrilled to be spending time together. Their happiness only made me realise how miserable I felt,” she said, “By the time New Year’s eve arrived, I couldn’t wait for him to leave the house and go back to work.

“I knew then our marriage was over. Come January I packed a suitcase and left with my children.”

Jacquie found it tough being on her own at first but two years on, she is proud she found the courage to leave as she is much happier. She said: “Divorce day might have signalled the end of my marriage, but it also spelled the start of a new chapter. And I don’t regret it for a moment.” 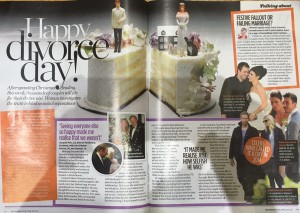 Woman agony aunt Suzie Hayman said in the article that many of us blurt, “I want a divorce” in the heat of the moment. She recommends calling a counsellor first, before going to a lawyer, to ensure couples don’t rush into something they later regret.

This is the third time I have placed Jacquie’s story for her! She recently appeared in the Daily Mail and has also appeared on ITV This Morning!

Are you divorced? I am currently looking to speak with women who divorced their husbands and have made a new life for themselves. If this is you, and you have an inspirational story to sell to a magazine or newspaper, then do get in touch…