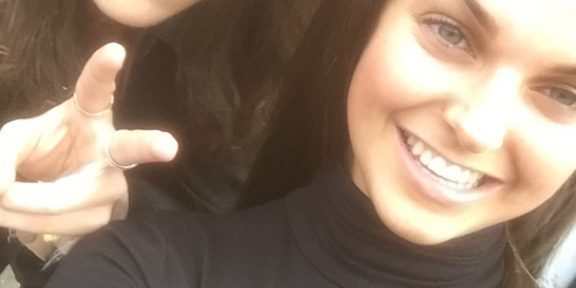 Fans thought Amy Whelan was Harry Styles’ new girlfriend when he posed for a selfie with her… story on Mail Online. 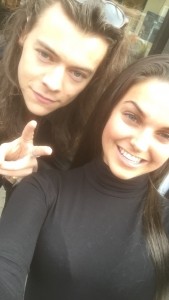 Hairdresser Amy Whelan, 20, was left terrified – after getting A DEATH THREAT when she posted a selfie with One Direction’s Harry Styles online.

One young fan wrote: ‘If you don’t tell me where Harry Styles is I will kill you.’

Dark haired Amy, who bears a striking resemblance to Harry Styles current girlfriend, Keeping up with the Kardashians star Honor Kendall, bumped into singer Harry Styles as he was shopping at the weekend (Saturday) in Waitrose in Temple Fortune, north west London.

And she told Mail Online how she was stunned by the reaction after posting a selfie with him.

The stylist said: ‘I was shocked that a pic with Harry Styles could cause such a uproar.

‘Since I took the photo I have been inundated with desperate fans. Some are quite jealous of me – when all I did was get a quick selfie of him.’

Amy, who says she ‘likes’ Harry Styles but was not a big 1D fan, was washing a client’s hair in a nearby salon when she heard Harry was shopping in nearby Waitrose supermarket.

She said: ‘My woman client, who is a massive fan, jumped up and wrapped a towel around her head. Then she rushed out of the door to see him. I just followed to see what all the fuss was about.

‘I was amazed to see Harry Styles in the supermarket picking up groceries – he was the last person I’d think of bumping into.

‘But when my friend asked if we could have a selfie with him he just moved in closer to me and I took a snap. It was all over really fast.

‘Harry seemed really nice. He was a real gentleman and just took it all in his stride as a bit of fun. I just went back to work and thought nothing more of it.’

It was only after posting the pic on Instagram her phone came alive with thousands of Harry Styles fans liking the photo. Since then it has gone viral through Facebook and Twitter.

Amy, from Borehamwood, Herts, who describes herself as ‘currently dating someone’, said:  ‘I only posted it to show friends and I have no idea how fans even found it. Many fans seemed to think I must be Harry Style’s new girlfriend. I had some very odd comments such as one asking what he smelt like! But nice looking as he is, he is not really my type. I prefer more muscly men with shorter hair and stubble.’

Harry Styles is currently rumoured to be dating reality star Honor Kendall. However, the couple are believed to be taking their relationship slowly with Kendall living in Los Angeles and New York and Harry living in London.

Story about a celebrity to sell? Contact Featureworld for free advice…