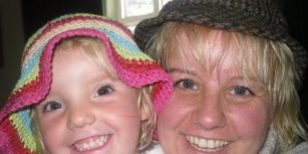 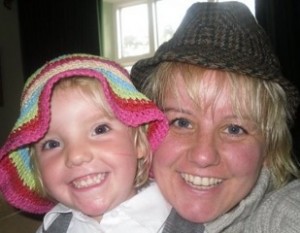 Then a horse named Dollar nuzzled her. He became Daisy’s legs.

Doctors amazed Daisy is now at mainstream school and mum Eileen puts it down to an extraordinary bond between her daughter and Dollar.

I am so fortunate at Featureworld that I get the most wonderful interviewees contacting me and I am able to place their uplifting stories in the national press – hopefully bringing joy to millions of readers.

Mum Eileen and her daughter Daisy are interviewees with an extraordinary story about how Daisy was healed by a horse. For when Daisy confidently trots across the fields on Dollar you would simply think she is a very accomplished young rider. 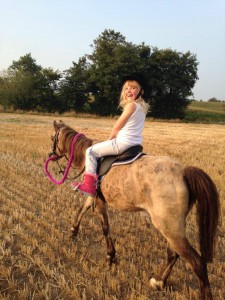 But the fact Daisy is able to sit up, let alone ride a pony, is a miracle.

Incredibly she pulled through but her prognosis was grim with doctors predicting she would never walk or talk.

However, they didn’t count on the healing powers of a horse called Dollar.

When mum Eileen, 45, took her to visit Dollar, her horse of 12 years –  he immediately nuzzled Daisy.

Eileen used to take Daisy riding with both of them sat on Dollar. From then on Daisy’s face would light up every time she saw him.

Then she began propping Daisy up on Dollar – and soon Dollar became Daisy’s legs.

Gradually could hold on to Dollar, who would only trot slowly and steadily to ensure she never fell off.

At the same time Dollar made Daisy laugh – he encouraged her to speak. It seemed a miracle and more was to come.

Through balancing on Dollar Daisy strength in her paralysed back grew until she could sit on Dollar and ride him.

Today Daisy is aged 7 – and against all the odds doing well at mainstream school. Although she never regained the use of her right arm and leg, it’s on Dollar she is happiest. 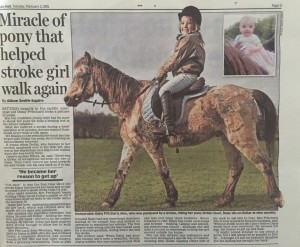 Daisy in the Daily Mail!

No-one ever guesses she is disabled – in fact people comment on what a good rider she is.

Daisy is Eileen’s fifth child. She had two sons and two daughters with her partner and was sterilised. But when she and her partner grew apart and she met David, a company director, through the stables where she kept her horse, she longed for just one more child.

Daisy seemed perfectly healthy when she was born but within months became short of breath. After months of tests doctors diagnosed a heart defect. It was during an operation to correct it, she suffered a stroke.

Sadly the pair have now split and he is in a new relationship. But Daisy is the light of Eileen’s life and she is so grateful to Dollar. “Dollar brought my daughter back to me and I will be forever grateful.”

And some great news – Eileen and Daisy are now set to appear in a women’s magazine. They have also been on Channel 5 news and are about to appear on ITV news!

Eileen says: “When I saw the Daily Mail article I just sobbed. It was so beautiful. Thank you so much!”

Has an animal helped you in some way. I love pet stories and so do magazines and newspapers! Tell me about your extraordinary pet!