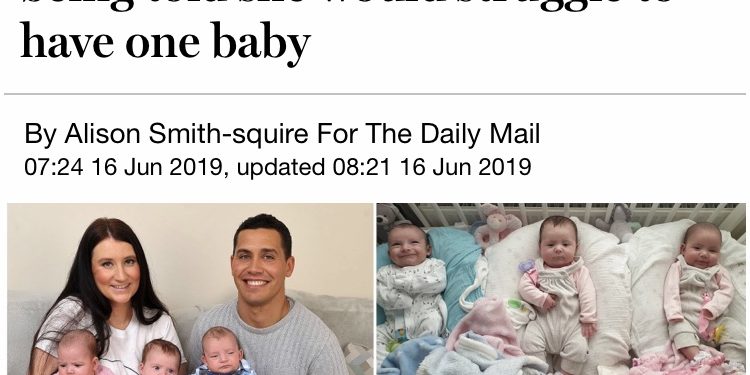 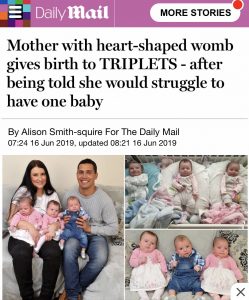 The Sheppard family on Mail Online

Doctors told Jemma Sheppard, 31, she would struggle to carry one baby

As well as polycystic ovarian syndrome, she has a heart shaped uterus or two womb cavities

But astonishingly she gave birth to non identical triplets

Doctors believe all three babies squashed up into one womb

However were all born healthy

They are the miracle children Jemma and her husband Anton never thought they’d have.

After being told she’d have difficulty conceiving doctors then told Jemma, who suffers from polycystic ovarian syndrome had already been unsuccessfully trying for a baby when she was then told she had a rare ‘heart shaped womb’.

The condition meant she had two wombs – two separate uterine cavities joined by one cervix – which would make carrying one baby difficult.

The couple from Newport, were devastated. But after taking fertility drugs to help her ovulate, she was amazed to discover she was expecting triplets.

Incredibly all three babies squashed up in one of the womb cavities. However, the non identical two girls Elevyn and Areya and son Rome were born at 35 weeks healthily.

Three weeks after they were born the couple took their adorable family home where they are all thriving.

Click on the link to see more photos: their amazing story appeared on Mail Online

Do you have an amazing story to sell? Contact me to find out how to get your story on Mail Online >>>

Read more – selling a story to the Daily Mail