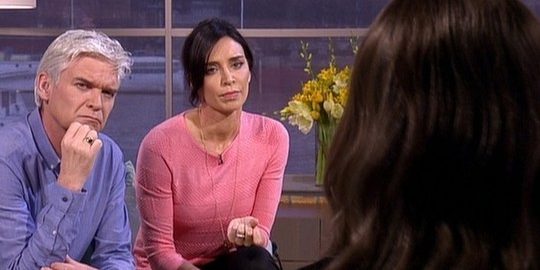 Raped by my dad… 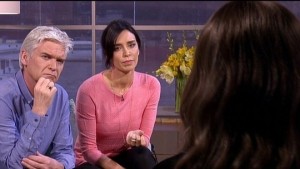 Helen on This Morning

ITV This Morning appearance for woman raped by her dad.

Following on from her double page story in Take a Break magazine, I was delighted to offer Helen Rees the opportunity to appear on television.

And Helen was featured on the sofa of ITV This Morning where she was interviewed by Philip Scofield and Christine Bleakley.

Helen’s story shocked the presenters who were visibly moved as Helen related her nightmare.

Helen’s mother left when she was young and she was brought up by her dad. But from a very young age she was persistently abused and raped by her dad.

In her teens she eventually got pregnant and gave birth to a daughter, Sarah. Despite the horror of her conception, Helen loved Sarah dearly.

Never wanting her to know the truth about her birth, she made up a story that she got pregnant by a lad.

Sarah grew up believing this. But in the meantime Helen sought to sue social services for leaving her in the care of her father (later examined by doctors and diagnosed as insane.)

It was then in her late teens, just as Helen’s case against social services was about to go to court, that Sarah stumbled on some of the documents.

Helen arrived home to be confronted by a devastated Sarah who blamed her for not telling her the truth earlier.

As with Take a Break Helen appeared to tell the story anonymously. This is because identifying her would identify her daughter and her daughter still doesn’t want anyone to know about her past.

For a long time Sarah was so upset she did not speak with her mother – but the pair are now rebuilding their relationship.

It is rare that anonymous stories can appear in this way – Helen and Sarah are not their real names – but when they do, it is always due to legal reasons as in this case.

If you have a similar story to sell to a magazine or would like to appear on television, contact me in confidence for free advice.