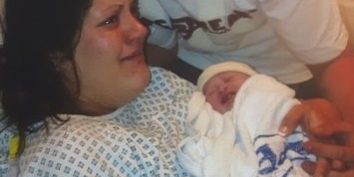 Hospital compensation story: Baby who came back from the dead … story in THE SUN ON SUNDAY 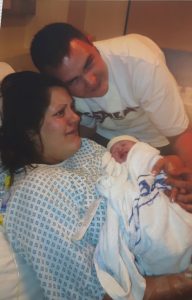 Poignant moment in the delivery room …

Starting school is a milestone for any mum and her firstborn child. But for Archie, four, and his parents it is especially poignant.

For when mum Sam Pothecary was about to give birth by emergency caesarean doctors told her he had died.

Despite begging them to deliver her baby, Sam was ordered off the operating table and told she had to undergo a natural birth.

It was only two days later – after going through a gruelling natural delivery – that to the shock of doctors Archie was delivered alive.

Now Sam and husband Matt, who have since sued the hospital for compensation for their devastating error, are speaking out about their extraordinary ordeal.

After two years of trying Sam had finally fallen pregnant – and at her 20 week scan they were given the wonderful news it was a little boy. 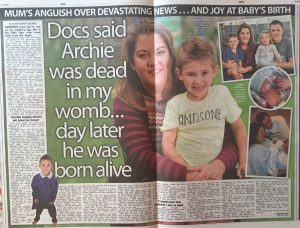 Archie and his family in The Sun!

But a week after his due date, she realised she hadn’t felt him kicking. Panicked she rushed to hospital where she was hooked up onto a monitor to be told her baby’s heart was fluctuating and he needed to be delivered immediately.

She was rushed into theatre for an emergency caesarean and just before, lying in the operating table, a midwife placed a monitor for one last time over her tummy. It was then the midwife said there was no heartbeat and after another scan her baby’s death was confirmed by a doctor.

Sam, her partner Matt and her mum begged doctors to do the caesarean. After all minutes ago there had been a heartbeat – why were they delaying in getting him out? But the medical staff refused. Shockingly they said as her baby had died she needed to go through a natural delivery.

Incredibly she was then left for 24 hours before the process could begin. During this time the couple had to break the news to family and friends that their baby had died. They also had to plan his funeral.

During this time Sam thought she felt her baby move – but nurses said it was just where her stillborn child was swaying inside her.

The next day she went into labour – after a gruelling eight hours she, Matt and her mum all held hands as their baby emerged. The worst nightmare was about to begin. But then they heard a tiny gasp for air. Their baby was alive.  Doctors raced to the scene and checked him out – Archie was perfect.

However, the couple then had the worry over the next two years that Archie could have been damaged by drugs given to Sam when doctors thought he had died. It is only now, as he has reached all his milestones and is about to start school, they can finally breathe a sigh of relief that he is growing up to be normal boisterous little boy.

The couple have since sued the hospital and Archie now has a baby sister, Mia.

Archie, is now aged four and has recently started school  – it is a milestone the couple never thought they’d see.

Read it here: The story appears over two pages of The Sun on Sunday newspaper.

We have now gained Sam further publicity with a top women’s weekly magazine – plus her story appeared in Australia on a top parenting website!

Do you have a hospital compensation story for a newspaper or magazine? Contact me for free and confidential advice about how to gain publicity for your story >>>