Peaches Geldof could be investigated by the Police for reportedly tweeting the names of the mothers who helped Lostprophets paedophile Ian Watkins abuse their babies. 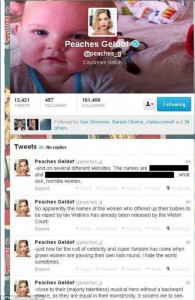 Everyone can relate to her outrage and why she was moved to allegedly tweet their identities to her thousands of followers. After all, a young mum herself, it is unimaginable how any mum could allow her child to be abused by anyone.

But worryingly the top comment on MailOnline is: “I don’t really understand why the women have not been named to be honest.” And at Featureworld legal issues are something we find many people coming to us with sex attack stories have a lot of difficulty with.

Only this week for example, Featureworld received an email from a young mum whose partner was recently convicted for sexually abusing her young child.

“I want him named and shamed,” she said, of her partner who faces a lengthy jail term.

However, if her partner is ‘named and shamed’ as she wishes and she tells her story of her horror when she found out he was abusing her child, then her child will be identified.

This would be illegal. Rightly, the law is all about protecting the victim of a sexual assault and all victims (whatever their age) are legally granted lifelong anonymity.

The only way a victim can be identified is by ‘waiving their anonymity’. This means they sign a legal written statement consenting to being identified.

So it would be impossible legally for this interviewee to ‘name and shame’ her ex partner as she hopes to.

Similarly,  Ian Watkins’ victims – those abused babies – also have the right to anonymity for the rest of their lives.

They have the right to go to school and grow up without people knowing that they were victims of this sex abuse.

The only way the babies can be identified is if in years to come when they are adults they decide to waive their anonymity. Then, if they choose this, they must do so themselves without any pressure from anyone else and of their own free will.