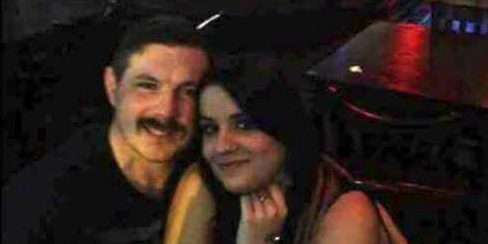 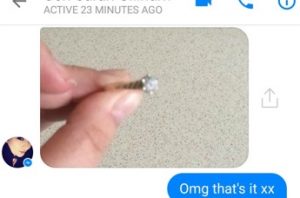 The ring was found by the other woman!

Emma lost her ring when she was dating Alan Goff

Love cheat and love rat stories are always popular with newspapers and magazines. So when Emma Cropper contacted me with her quirky story about how Alan Goff was not only being unfaithful but had stolen a ring from her, I knew it would be a story a magazine would be interested in.

Emma’s story appeared on the front cover and over two pages. And you can read it below…

Do you have a real life love cheat story to sell to a magazine? Name and shame your cheating fella – and earn some money at the same time. Find out how much your cheating story could be worth by contacting me >>>

THE RING OF TRUTH!

Emma was upset when a family heirloom vanished. Then a pal saw her post about her missing ring on Facebook…

“Slipping my nan’s gold ring off my finger, I placed it carefully on the bedside table and watched it glinting in the light. 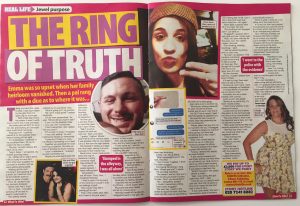 With its fake diamond, it wasn’t worth a lot to me. But when my nan died she left it to me – and it meant the world.

“I’m shattered,” I said to my boyfriend Alan Goff, 32 as I switched off the bedroom light.

“Me too,” he replied, snuggling up to me.

Blearily I closed my eyes and the room swirled as the evening’s alcohol caught up with me. Two months ago I’d popped out for a drink with friends after work. Alan caught my eye, we got chatting and the rest as they say is history.

Right place, right time. As I fell asleep I thought how lucky I was to have met him…

The next thing I knew it was morning. Light was streaming in the bedroom.

I sat up and immediately I noticed something precious was missing.

Nudging Alan awake I said: “My ring – I remember putting it next to me … last night. It was the last thing I did before we went to sleep.”

He opened his eyes. “I don’t remember seeing it there…” he said vaguely.

I jumped out of bed. Already I was moving the bedside table to see if it had fallen down the side.  Nope it wasn’t there.

Alan leapt out of bed to help with the search.

“Are you sure you took it off last night,” he said. 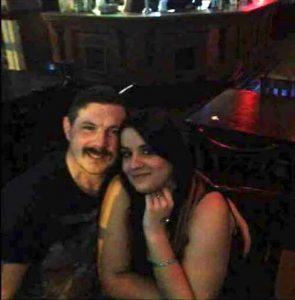 “Of course I am,” I snapped. I went through the same ritual every night. I might have had a few drinks – but I wasn’t that drunk…

We searched the room from top to bottom but there was just no sign of it.

I was distraught. How could I have lost it?

Alan thought I might have accidentally washed it down the bathroom sink when I was cleaning my teeth. He even got someone to check the pipes but it wasn’t there.

“It must have slipped off your finger while we were out..” he suggested.

Weeks passed but the ring didn’t turn up.

Then one night I was out in the pub with Alan again when I felt dizzy.

“I’m just going out for some fresh air,” I said.

Alan joined me. But I my legs were like jelly.

The next thing Alan suggested we take a short cut to get home through an alleyway.

And then as I passed out, I thought I saw his face …

I came to and I was on my own. Alan was nowhere to be seen.

I had no idea what had happened. Immediately I felt in my pocket for my iPhone – it wasn;t there. And my purse was ripped.

Luckily a friend came out of the pub.

“What happened to you?” she said.

I rang Alan from her phone. “Where are you?” I asked.

He sounded surprised. “You weren’t very well. I walked you to the taxi rank and put you in a taxi to go home… don’t you remember?”

My head was throbbing. No I didn’t remember. Had I been drugged – was there something in my drink? I had no idea but anyway the next day I reported the theft of my phone to the Police.

But the Police gave me little hope of ever getting it back. Then Alan had an idea.

“Tell me what your phone password is,” he says, “then I can do an iPhone tracker and see if I can find it.”

I refused. There was something about Alan that I didn’t like.  Something uncaring.

And then a few weeks late he stood me up on a date. Furious I decided to finish it.

Months passed and I managed to put my relationship with Alan behind me and move on.

An old friend, Lyn, who had been working abroad, rang and we met for a catch up.

“So what’s been happening with you?” she asked.

Where to begin… “well, I was seeing this guy Alan,” I said. It turned out she knew Alan too. He’d once missed his bus home and she and her partner let him kip at theirs for the night.

“He was a strange guy,” she said, “he stayed that night and a load of jewellery went missing. We didn’t like to point the finger of blame but I always wondered.”

Suddenly I thought of my ring. “That’s odd because a ring went missing when I was seeing him,” I said, “and also… my phone went missing too.”

It was then she added: “I’m sure he’s engaged to get married now…”

Engaged? What already? Alan and I only split three months ago.

Lyn was still talking. Alan’s fiancé was someone called Sarah I knew her vaguely – we were friends on facebook. “He’s been engaged to her for a while,” she said, “and thinking about it she said she found a ring in his pocket.  It was ages ago now – she was washing his jeans and it just fell out.

“She thought he’d bought it for her but he never gave it to her.”

I felt sick and angry. Was that my ring? There was only one way to find out.

As soon as I got home I sent Sarah a Facebook message.

“A mutual friend of ours tells me you found a ring,” I wrote.

Incredibly she quickly came back with a photo – there it was. My nan’s ring. My heart missed a beat. “Is this your ring,” she asked.

She added: “He left me for one nite the week after Xmas. Then wen he came back I was putting his jeans in wash n checked pockets.”

It turned out she’d confronted Alan who gave her some story about finding it by accident.

And she saw my post on Facebook about my missing ring but at the time put two and two together.

So Alan wasn’t just a thief – he was a two timing cheater as well!

Sarah also remembered he suddenly got a new iPhone. I bet that was my phone he nicked too… The next day I went straight to the Police with the evidence.

Now the Police took me more seriously.  They marked the phone as stolen and within weeks I got a phone call.

It turned out Alan had cracked my password, sold it to a shop and they had sold it onto an unsuspecting customer.  But he was found out when after the phone was marked as stolen, it was automatically locked and the customer had returned to the shop to complain.

Alan Anthony Goff was charged with theft of Lyn’s jewellery, theft of my phone and ring – plus fraud for passing a stolen phone to the shop. He denied the offences but was found guilty and in January 2016 at Chester Crown Court, he was jailed for 12 months.

Needless to say his relationship with Sarah is now over – like me, she found out what a cheating scumbag he was.

Thankfully I now have my ring back.

It would be easy to feel after what Alan did, I could never trust anyone again. But I have since met another man whom I’m set to marry next year.

And hopefully telling my story warns anyone else who meets the scheming Alan Goff in future knows what he is really like.”