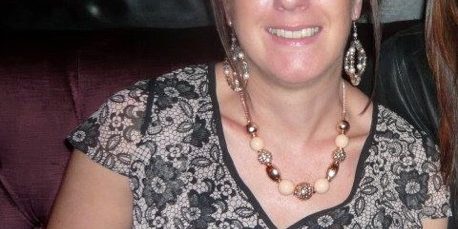 Story about bigamist Paul Dunstan in THE SUN newspaper… 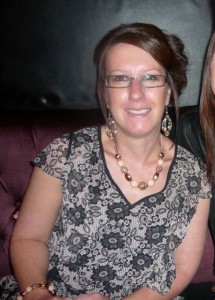 Gill as she is today

Gill Farrington, 44, didn’t believe her youngest child when he told her ‘daddy’s getting married’

The couple had split – but were not yet divorced. But then she saw the photos of ex husband Paul Dunstan on Facebook marrying not once but TWICE…

When Gill’s youngest child said “Daddy’s getting married” , she didn’t think it was possible. Gill and Paul had split in 2008. They’d grown apart and although they continued living together for two years, in 2010 he moved out because he had met another woman.

But the couple, who’d been married for 14 years and had two children, had never actually got divorced. So Gill, 44, didn’t see how her ex could marry. 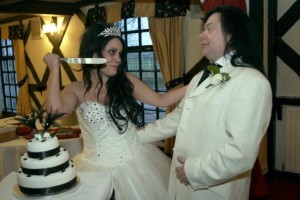 Dunstan and his new bride….

Then in January 2013 she spotted some photos on Facebook of a ‘wedding’ to his new love. Gill was furious as they were still married. But it turned out to be a ‘fake wedding.’ She asked mutual friends who’d shared the photos with congratulations to take them down – as he was still officially married to her – and when they did, she thought that was the end of it.

However, a few weeks later her youngest child said again Paul was getting married. She looked on Facebook and there was her ex, Paul Dunstan, at Gretna Green. At first she couldn’t believe it. There he was bold as brass smiling. Incredibly his wife was there at his side beaming. Meanwhile,  friends had left message of congratulations.

Gill, a business analyst, was even angrier – especially as she now realised he had involved their youngest son who’d told her daddy was getting wed again.  So she shopped him to the Police.

He was convicted of bigamy and issued with a 200 hr community payback order.

He claimed he had thought his divorced from Gill would be through before his wedding day and when it wasn’t he used a fake decree absolute instead which he’d bought online.

The couple are now divorced – that came through in November 2013. 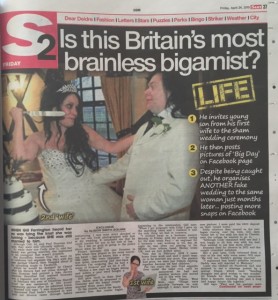 Incredibly it didn’t put Paul Dunstan off getting wed again. Her ex has since legally married his new bride in November 2014 – and once again those wedding photos were uploaded to Facebook.

But Gill won’t be getting wed herself any time soon. “Although we were getting divorced I always thought I could trust Paul,” she says, “so it still felt a huge betrayal.”

Did you find out your partner or husband was cheating on you on Facebook? If you have a similar story of bigamy or betrayal, contact me in confidence!