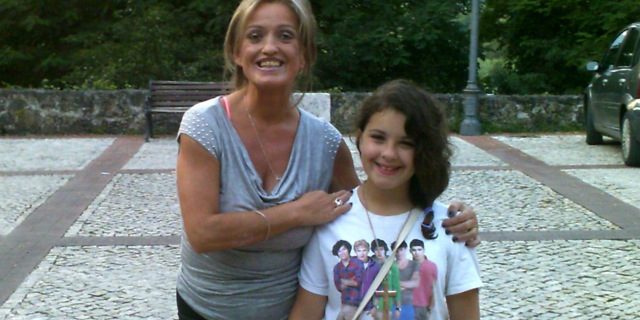 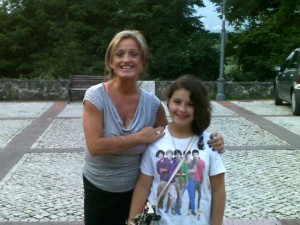 It is the reunion with her daughter Sara that mum Gillian never dreamed would happen.

Six years ago after becoming an alcoholic, former air hostess Gillian McFarlane, 48, was forced to give daughter Sara up to live with her dad and his new wife in Italy. Sara was just five and giving her up broke Gillian’s heart. She began drinking even more and ended up in hospital with Cirrhosis of the liver. Doctors warned she could die – but then she thought of her daughter and the thought of abandoning her again – by dying – gave her the strength to get better.

Gillian faced a huge battle to get well but after three years of being sober her dream of being reunited with her daughter came true when four weeks ago, during a summer holiday visit, Sara, 11, said: “Mum I want to live with you.”

Her daughter – who has chosen rainy Britain over sunny Italy to make her home – is now officially back with Gillian.

As an air hostess, Gillian thought she had everything. Her happiness was complete when aged 37, she met Antonio, an Italian man who was living in the UK and they had a daughter, Sara. 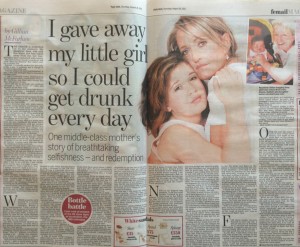 Gillian and Sara in the Daily Mail

But when Sara was four, and with Antonio away a lot on business, the couple split, and Antonio stayed to Italy.

Gillian had always enjoyed drinking socially and she began drinking more. The focus of her life became drink. Gillian realised she was an alcoholic and couldn’t cope with her little girl.  So she wrote to Antonio, who she hadn’t seen for a year since they split, to see if he could care for Sara. And when due to postal issues she didn’t hear back from him, she was so desperate she rang Social Services.

In a heartwrenching scene, with Sara crying for her mummy, Social Services arrived that night to take Sara, then aged just five, into care. Sara was then a week later flown to Italy to be reunited with her father who had since got Gillian’s letter and agreed to have Sara.

It meant Sara going to live hundreds of miles away with Antonio and the woman who was later to become his wife.

It was a decision that almost broke Gillian. Over the next few years and grief stricken by her decision, she simply drank herself into oblivion. For the next two years she was so drunk she didn’t see Sara.

Then one day Gillian woke up unable to swallow and doctors rushed her to hospital. She was so ill with cirrhosis of the liver and her whole body packing up that she almost died. Thankfully with excellent nursing care and counselling Gillian got better.

At last she was sober enough to visit Sara in Italy for a wonderful reunion. But by now Sara had a life in Italy and although Gillian desperately wanted her daughter back to live with her in the UK, she couldn’t uproot her again.

However, she and Sara spoke often on the phone and Gillian visited regularly. And when Sara recently came over to the UK she decided to stay. Antonio is happy – he continues to be a wonderful father who always put Sara first and says at age 11 she is now old enough to make up her own mind. She can always go back to Italy.

However mum and daughter have been really catching up. Sara has started senior school and already made new friends. The pair love going shopping and chatting. Gillian has not had a drink in three years and is now looking for a job in sales.

It has been a total pleasure to work with Gillian on her story.  Gillian’s story about how she gave Sara up so she could carry on drinking has been printed before but Gillian really wanted to tell her story again with this wonderful update at how she has been reunited with her daughter. She wanted to show even the most heartbreaking real life story, can truly can have a happy ending.

The Daily Mail story includes some absolutely stunning photos of Gillian and Sara, who despite all the trauma – or perhaps because of it – now have an unbreakable mother-daughter bond. Read it here.

Gillian’s story has since been sold again and appeared in TAKE A BREAK magazine!  Following that, she appeared via Featureworld on Television.

Of her story in the Daily Mail, she says: “What a wonderful job you have done for me.  The article is perfect, just as we discussed to the word and the photos are lovely. Your time and effort is evident and the story is beautifully written, Thank you.”

Do you have a story about alcoholism to sell? Or perhaps you have told your story before to a magazine or newspaper and now have an interesting update? If so, we would love you to contact us using the form to contact Featureworld to the right of this page>>>