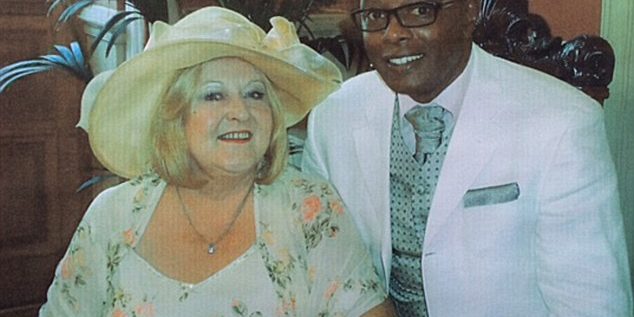 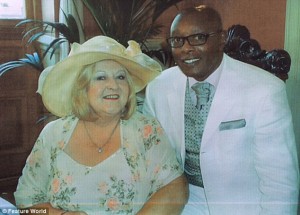 It’s a familiar story: British grandmother on holiday falls for a foreign man and marries him only for the relationship to collapse.

The difference in this case is that Judith, 61, a former teacher, did not need to travel abroad to meet her Kenyan husband. He was already in England and she met him on a dating website in the UK.

Yet, in an extraordinary twist,  Judith claims she recently made a shocking discovery.

She discovered her husband – who regularly flies abroad – has 47 other women dotted all over the world.

The divorcee, who gave her husband around £25,000, now says she was part of an elaborate scam to make money – and she came to Featureworld in the hope that telling her story publicly will prevent others from making a similar mistake. 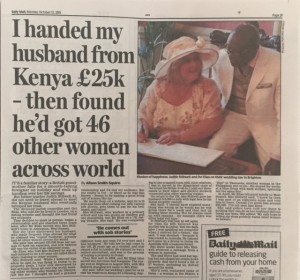 Judith in the Daily Mail

After meeting accountant Ovi – or Steve Givochi as he is also known – in 2009, in August 2012 they wed at Brighton registry office. During all this time Steve, who also called himself Ovi, was travelling to and from Dubai where he claimed he was buying a propery and Judith gave him some money to help fund it.

During his frequent and sometimes long trips abroad, she always believed he was on business and visiting a property he was supposedly building in Dubai.

In February this year she waved him off at Heathrow – believing he was flying to Dubai.

But shortly after he left she was updating her computer when she noticed his ticket had been to Australia. He explained it away by saying he’d taken a detour to Australia en route to Dubai.

But a few weeks later she then got another shock when an email arrived from a strange woman in Australia. It turned out to be a woman in Australia who he’d been living with. She had found out about Judith because Steve had left his computer open and she’d seen some emails to Judith.

She’d also discovered a list of another 45 women dotted around the world. She’d tracked down a woman, Roz, in Tasmania and another in the US. In fact it appeared Steve funded is lifestyle, bed and board by getting the women to fund him.

Judith contacted the woman in the US – incredibly she too had met Steve on a dating website. And although Steve was married to Judith, he had told her he was single. She too had given Steve money.

Devastated Judith went to the Police but was told they could do nothing as Steve – who has just disappeared – has not broken any laws.

The story was also placed with the Daily Mirror and The Sun newspaper.

Following her newspaper articles, Judith was asked by ITV This Morning to join them on the sofa and was interviewed by Holly Willoughby and Philip Scofield! Find out how Judith got on here.

Featureworld tried to contact Mr Elias on Judith’s behalf but drew a blank. Do you know the whereabouts of Mr Elias? Have you met him? If so, contact me in confidence…