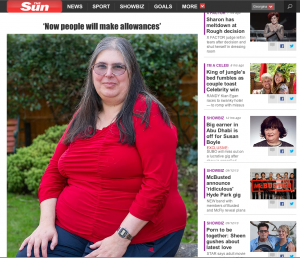 Britain’s Got Talent singer Susan Boyle has recently revealed she has told she has Asperger’s syndrome saying she is relieved it has been diagnosed –  Susan, 52, had been wrongly diagnosed with brain damage after birth complications.

The condition affects around 700,000 in the UK and although people are often highly intelligent, they often struggle to communicate.

Sell my Story Featureworld interviewee Jayne Chesterman was one of four people diagnosed with Asperger’s as adults whose story appeared in The Sun.

We have previously placed Jayne’s story before and this is a good example of how, even years after placing stories for the first time, we are able to place them again.

In fact Jayne was only diagnosed with Asperger’s after going to a psychological assessment with her daughter. Her daughter has since also been diagnosed as having Asperger’s and it was then Jayne realised how alike they were – and how she ticked so many boxes.

Despite having Asperger syndrome Jayne works as a financial administrator and she is married to Malcolm. As well as their daughter, a receptionist, they also have a son, a student.

As Jayne says – and she and Susan Boyle prove – people with Asperger’s can go on to live perfectly normal lives.

Have you been diagnosed with a similar condition? To raise awareness – and receive a thank you payment as well – contact us using the form to the right of this page >>>

Hubby divorced me for spending too long on my phone!
February 12, 2017