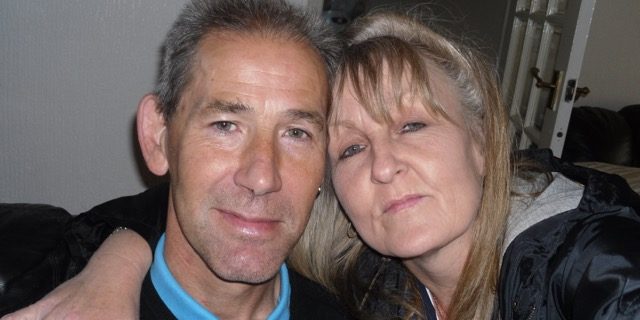 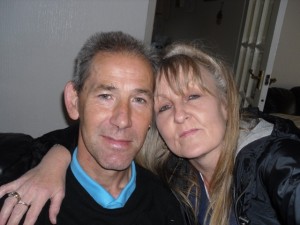 When Jackie Hunter’s husband Gordon left her for another woman, she was devastated. The couple’s second child was just 12 weeks old when she discovered his affair.

And when he walked out to be with his lover, Jackie thought she’d never get over it.

But 15 years after the couple first married, they have remarried – after Jackie forgave him.

Jackie, now 52 and Gordon, 53, were childhood sweethearts – they lived in the same street and finally got together when Jackie was 16.

In 1985 when Jackie was 22 the pair wed. They had a daughter in 1986 and nine years later a son. But Jackie got post natal depression and worse was to come when her son was three months old and she overheard someone in the village talking about Gordon’s other woman.

Initially Gordon denied it but a week later he confessed and left. It turned out the woman he’d left Jackie for was a friend he’d met through a friend’s sister. The whole village had known – everyone it seemed except for Jackie. 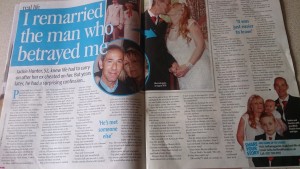 Jackie and Gordon in Bella

It took Jackie three years to recover from the betrayal. During that time she met another man and she and Gordon divorced. Seven years went by but because of the kids, they kept in contact.

However Jackie could never get over Gordon and after seven years her new relationship came to an end. It was then one day Gordon came to see her and the kids and confessed he had never got over her either. Although he was still with the woman he’d left Jackie for, he realised it was a huge mistake. In hindsight, he hadn’t known how to cope when Jackie got post natal depression but it had driven him into the arms of the other woman. Now he wished he hadn’t left Jackie.

Jackie said she couldn’t cope with heartache again. She banned him from coming round – saying he kids were now old enough to visit him by themselves.

But Gordon didn’t take no for an answer. A week later he turned up – he had left his other woman and wanted to be with Jackie.

Jackie knew he was genuine. After five years together – when Gordon suffered a series of strokes – he finally proposed and on 21st August 2015 the pair remarried.

Jackie and Gordon’s story appeared on the cover and over two pages of Bella magazine!

Do you have a relationship story to sell to a newspaper or magazine such as Bella? If you and your fella have put the bad times behind you, then get in touch…

Category: Sell my story to Bella magazine., Stories sold in 2015, Stories sold to a magazineBy Alison Smith-SquireOctober 20, 2015
Tags: Relationship stories
Share this post
Share with FacebookShare with TwitterShare with PinterestShare with LinkedInShare with WhatsApp