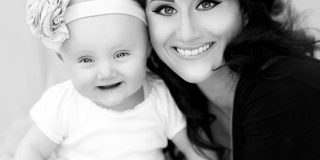 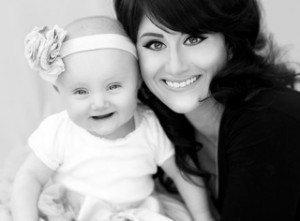 A boat which caught fire, an ambulance, a taxi ride to a second hospital accompanied by two missionaries and a private jet flight back to the UK – the amazing journey for one pregnant woman- after she went into labour on a cruise… (and baby Cornelia ‘Cruz” Lewis was born healthily…)

After an amazing wedding day six months pregnant Victoria Lewis, 32,  and her husband Michael, 29, went on the cruise of a lifetime.

But 14 days into the Mediterranean voyage, at 28 weeks, Victoria’s waters broke.

Within five hours the Italian lifeguard arrived to take Victoria to dry land. But then that boat caught fire. After limping into the harbour Victoria was taken by ambulance to a nearby hospital – only to discover it did not have the facilities to deliver a baby, let alone a premature one.

Victoria then had to endure a two hour journey by ambulance to another hospital. By now a nurse had found two missionaries who incredibly were to stay with Victoria until she had her baby.

After arriving at the hospital – some 14 hours after her waters broke – the baby’s heart rate dropped and she was rushed to theatre for an emergency c-section. Cornelia Lewis arrived healthily – with her parents aptly giving her ‘Cruz” as a middle name.

Cornelia had to remain in intensive care for three weeks before her insurers could get her home. Amazingly she was taken by ambulance to the airport where a private jet was waiting on the tarmac. 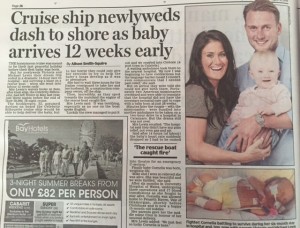 Victoria, Michael and Cornelia in the Daily Mail!

This wasn’t the end of the saga. After arriving at Cardiff airport, she and baby were taken by ambulance to University of Wales where she remained for six months. Unfortunately she got an infection and needed 17 blood transfusions.

But luckily she survived and after six months the family finally got her home.

Victoria’s amazing story appeared in the Daily Mail newspaper… along with some stunning family photos!

Read the story in the Daily Mail

Victoria said: “It looks fab, thanks Alison for writing such a great piece x’

And her story has now been placed with a leading women’s magazine…!

Have you got an unusual honeymoon story to share with the nation in a newspaper, magazine or on TV? If something unusual, odd or wacky happened on your honeymoon, contact me for some free advice!