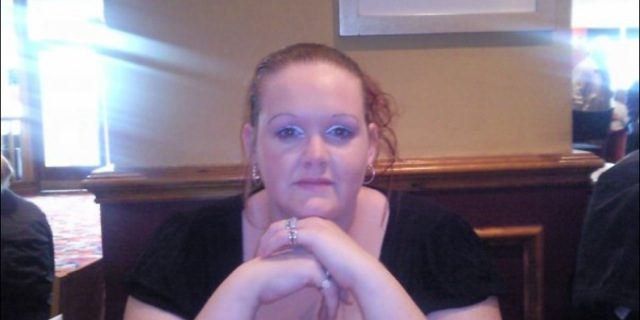 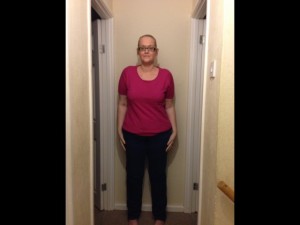 While in hospital in a coma mum Louise Griffiths, 37, lost a whopping 17 stones. And when her two sons saw her they were terrified as they thought she wasn’t their mummy… and she didn’t like being thin either.

Louise was always a big woman – both tall at 6ft and curvy.  She knew she wasn’t healthy. At 31 stones she often had difficulty getting up the stairs. But she married and had two children and while she knew she should lose weight, she just adored food. She and her husband – also a big man – often joked to friends about their weight.

From the age of 18 Louise suffered from a brain condition – IIH – where she has too much fluid on the brain. Although she had an operation to put a shunt in to drain it, it meant she couldn’t exercise much either.

But she never let the condition get her down – until one day Louise was admitted to hospital  after contracting a stomach blockage infection – a side effect of the medication. She weighed 31 stones and after a few days her condition became so severe she was deliberately put into a medically induced coma. When she woke two weeks later she had lost around four stones but for seven weeks she was in intensive care and still too ill to see her sons aged eight and ten.

By then she’d lost even more weight and by the time they saw her in May she’d lost a further five stones. But nothing prepared her for her sons’ reactions. They were horrified when they saw her for the first time as she didn’t look like their mum. 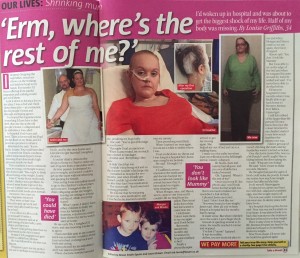 Louise in Take a Break…

So it was a shock when discharged from hospital she finally looking in the mirror. Far from being happy with her weightless, she felt frail and too thin. The shock of losing so much weight was terrible and for a month Louise felt upset about it. None of her clothes fitted her – no-one recognised her. It was as if she wasn’t her anymore. Even her kids kept on saying how small she was – they used to love being cuddled into her big tummy.

However, Louise now she realises she can walk up the stairs without getting out of breath and she has begun to feel lucky. Doctors said her massive weight put such a strain on her heart that it was lucky with the infection, she is still alive…

After her story appeared in Take a Break magazine Louise said: “Just to let you know the story was in today’s Take a Break and I’m really happy with it 🙂 if I’m honest I was really nervous lol but I’m so glad I contacted you and I did it so thank you so much for all your help :)”

Do you have an extraordinary real-life story of weight loss to sell to a magazine? If so let me know about it!

I woke from a coma – and I’d lost so much weight no-one recognised me!

At 6ft and weighing 31st Louise Griffiths was larger than life with a personality to match. So when she lost a whopping 17stones she was devastated…

Holding my throbbing head, I stumbled into my bedroom and collapsed onto the bed.

I was just 18 years old and thought my terrible headache was just down to tiredness.

But next thing I knew I was in hospital. There, a doctor gave me some terrible news.

“I’m afraid you’ve got excess fluid on the brain,” he said, “luckily you’re in the right place. Because if we hadn’t drained it off, you could have died.”

My condition was something called Inter-cranial hypertension (IIH for short).

Worryingly doctors thought it could have been triggered by taking the pill. But fortunately it could be controlled by drugs.

And I didn’t let it get me down.

Instead, a trained chef, I’d treat myself to fabulous dinners.

“You only live once.” That was what I told myself when I tucked into a creamy home-made curry. Or when I gorged on a large plateful of pasta bake.

Only unlike some women who are constantly on a diet, I liked being curvy. And I could take a joke. At six foot tall I had to. So when friends said, “You’re a big girl, Louise,” I’d just laugh.

And I always dressed well. My outfits may have been a size 34 but with my height and curves I could certainly make a grand entrance at any party.

Teatimes for Justin and I were an excuse to enjoy food.  “You only live once,” I said to myself. My teenage near-death experience had taught me to enjoy life to the full. Slapping down the steak in the frying pan, I’d slather it in butter and watch it sizzle.  Scooping it onto a plate, I smothered it in cream sauce.

He loved my home-cooked meals as much as I did. Lasagne, cream cheese sauces on chicken. Not to mention McDonalds, Chinese food and an Indian curry. Was there any food I didn’t love. No, I don’t think there was.

Aged 23 I had our first son, Morgan.  We were overjoyed – doctors had always said because of my weight, I’d have difficulty conceiving. But two years later I had Thomas. Pregnancy was a wonderful excuse to indulge in more eating.

Only by the time I got to my late twenties, I knew at 31 stones I was too heavy.

Just walking up the stairs could make me out of breath and running after the boys was virtually impossible.

Then in February (2014) I started to get terrible stomach pains. They were so bad they made me double up in agony.

Justin was so worried he rang an ambulance. I was rushed, sirens blaring from my home in Sandfield, Port Talbot, to hospital.

There doctors crowded round, prodding my huge stomach. One said: “Mrs Griffiths it would appear you’ve got a blockage in your bowel.”

He explained it was probably a side effect of all the medication I was taking.

That night I went into theatre. When I came round a nurse said: “Everything’s fine now.”

The next day I was too ill to see the boys.

“I don’t feel any better,” I said when Justin came round, “I don’t want anyone to see me like this.”

Over the next week my condition worsened. The days and nights blurred, rolling into one. Eventually I heard one doctor say to another: “She’s got an infection. We’ll have to put her into an induced coma.” The last thing I remembered was a tube being stuck down my throat.

Two weeks later I woke up in intensive care.

Justin was by my side. “I thought I’d lost you,” he said. It turned out my internal organs had started to fail. I’d been on life support.

For the next seven weeks I lay in bed in the intensive care unit hooked up to bleeping machines.

Fed by a drip, I could barely take a sip of water let alone eat.

Occasionally the boys would pop in to see me. But I was too ill to even lift my head off the pillow. All I could do was lie there underneath the blankets.

More weeks went by.  I was transferred to a different hospital where they took out my feeding tube.

A nurse said: “Your family’s here to see you.”

It was eight months since I’d properly spoken to Morgan and Thomas. I had barely got out of bed.

Now at last I felt able to sit up propped up against the pillows.

Morgan came in first. But instead of running into my outstretched arms, he looked at me in horror.

“Mummy you don’t look like mummy…” he said. He began to cry. “You’re not the same mummy.”

I looked down at my arms.  Suddenly I realised why he was crying. They looked like twigs with skin hanging off them.

For eight months I’d been buried under a pile of bedclothes. It was months since I’d looked at body – or my face. I knew I’d lost weight just lying in that hospital bed doing nothing.

But until that moment I had no idea just how much.

When I saw my reflection in the mirror I was as horrified as Morgan was.

My round face had gone. In its place was a small, whizzened one.

I shuffled over to a full length mirror and stared in disbelief.

I didn’t look like me. And I didn’t like it. In all I’d lost 17 stones. Now I only weighed just over 13stones.

“Most women would be pleased,” said Justin.

But I wasn’t. I was shocked.

A few days later I came home. I looked at all my beautiful old clothes hanging in the wardrobe and wept.

Being ill had robbed me of my personality. Once I’d been a big curvy woman, larger than life and full of fun. Now I was thin, yes, but looking like frail old lady.

Once the boys loved to cuddle up to me against my soft tummy. Worst, I still couldn’t eat all the foods I once loved as they were too rich for my tummy. I sank into a depression.

Then one day I walked up the stairs and suddenly realised for the first time ever I wasn’t out of breath.

I went to pick the boys up from school. No-one recognised me at first. Then one of he mums said, “actually you look well.”

At a check up my doctor said: “Your weight was such a strain on your heart, it was almost lucky you got that infection. Because it forced you to lose weight.”

I looked in the mirror and started to count my blessings.  Losing so much weight so fast was a shock but my new slimmer figure was growing on me.

Since then, with me unable to cook such rich high calorie meals, the whole family’s lost weight and we’re all much healthier.

As for me, I wouldn’t recommend my ‘diet’ to anyone. But I am feeling lucky to be alive.”