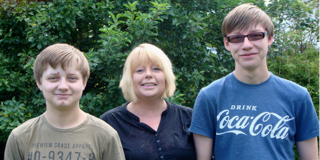 Mother of two Jacquie Pelc, 52, was too ashamed to admit her marriage wasn’t happy. 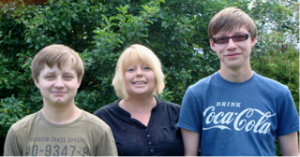 Jacquie and her sons

But one New Year she decided to re-evaluate her life…

January and the New Year after Christmas is said to be a peak time for divorce. Here, one mum of two describes how she left her husband after Christmas – and how she got her life back together again…

Over the past few years Jacquie had endured years of abuse and violence from Stanley – who has been found guilty of a number of convictions against her. Once he dragged her down the stairs by her hair after subjecting Jacquie to verbal and physical attacks, some of which were witnessed by their two sons.

Christmas had been a nightmare. That Christmas her husband Stanley had refused to sit with her and their two sons for Christmas dinner at the table,  insisting he watched TV while he ate. They never had Christmas lights outdoors as he didn’t like them. Christmas was the worse time as they were all together in the house and not out at work. Plus the fact everyone in the world seemed to be celebrating as a happy family, only highlighted how unhappy they were. 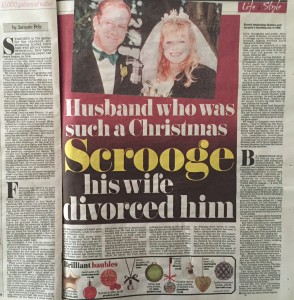 Jacquie’s story in the Daily Mail

For years Jacquie had put up with living in an unhappy marriage, mostly because she felt ashamed that her marriage wasn’t working and she didn’t want the children to come from a broken home.

However as New Year struck Jacquie had decided to leave. Her resolution was to change her life and her children’s lives. By the middle of January Jacquie had told her sons she was planning to leave and in early February they walked out.

She wished she’d left him earlier.  However, despite being relieved she was finally free of her marriage, it has been a rocky couple of years.

The beautiful cottage they lived in was tied to Stanley’s work taking wealthy families on fishing trips. It wasn’t a family home they both owned so as soon as she left, she lost her home. She relied on women’s aid and friends.

Last Christmas was hard being a single mother and she and her sons spent it with her sister.

But this Christmas she will be hosting it herself – and she can’t wait.

Jacquie’s story gained over 1000 comments on MailOnline. She said: “I hope it has given anyone trapped in a loveless marriage as I was the inspiration to leave.”

Jacquie’s story has now been placed with a top women’s magazine.

Do you have an inspirational feel-good story suitable for the Daily Mail, to sell to a newspaper or you want to sell your story to a magazine? I would love to hear it – and there is always a generous thank you fee! Contact me using the form to the right of this page for more details >>>