Story in the SUN newspaper…

Got a story to sell to The Sun newspaper? Fill in the quick submission enquiry form to the right! 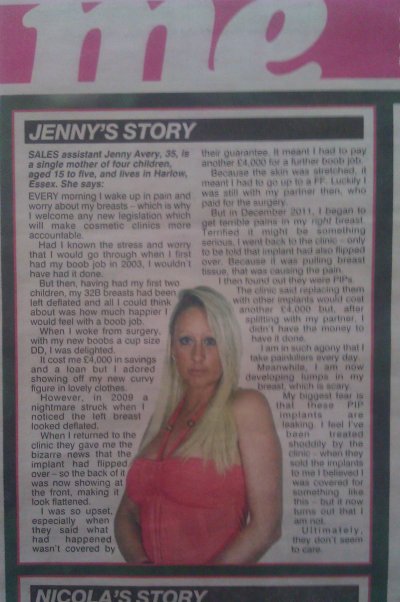 SALES assistant Jenny Avery, 35, is a single mother of four children, aged 15 to five, and lives in Harlow, Essex. She says:

EVERY morning I wake up in pain and worry about my breasts – which is why I welcome any new legislation which will make cosmetic clinics more accountable.

Had I known the stress and worry that I would go through when I first had my boob job in 2003, I wouldn’t have had it done.

But then, having had my first two children, my 32B breasts had been left deflated and all I could think about was how much happier I would feel with a boob job.

When I woke from surgery, with my new boobs a cup size DD, I was delighted.

It cost me £4,000 in savings and a loan but I adored showing off my new curvy figure in lovely clothes.

However, in 2009 a nightmare struck when I noticed the left breast looked deflated.

When I returned to the clinic they gave me the bizarre news that the implant had flipped over – so the back of it was now showing at the front, making it look flattened.

I was so upset, especially when they said what had happened wasn’t covered by their guarantee. It meant I had to pay another £4,000 for a further boob job.

Because the skin was stretched, it meant I had to go up to a FF. Luckily I was still with my partner then, who paid for the surgery.

But in December 2011, I began to get terrible pains in my right breast. Terrified it might be something serious, I went back to the clinic – only to be told that implant had also flipped over. Because it was pulling breast tissue, that was causing the pain.

I then found out they were PIPs.

The clinic said replacing them with other implants would cost another £4,000 but, after splitting with my partner, I didn’t have the money to have it done.

I am in such agony that I take painkillers every day.

Meanwhile, I am now developing lumps in my breast, which is scary.

My biggest fear is that these PIP implants are leaking. I feel I’ve been treated shoddily by the clinic – when they sold the implants to me I believed I was covered for something like this – but it now turns out that I am not.

Ultimately, they don’t seem to care.

Do you have a story about surgery that had gone wrong or has had a detrimental effect to your health? Just fill in the Sell My Story Form with some brief details…