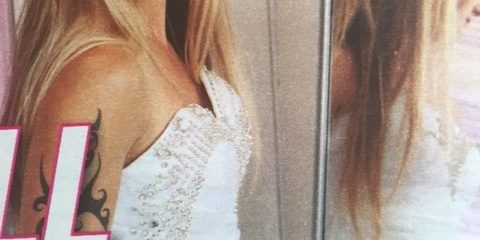 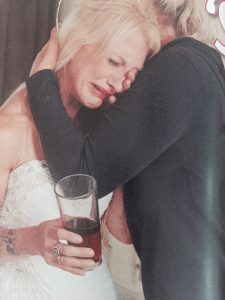 * But brave Carly decides to walk up the aisle by herself

After nine years and two children with fiance Ricky, 38, the wedding day Carly, aged 30,  had waited for had almost arrived – she and Ricky were to have a stunning double wedding do with her brother and his fiancee.

But three days before the wedding in April 2016  – after coming back from her hen do to Mallorca – she discovered from gossip that Ricky had cheated with her on his stag do. And when she confronted him over it, he admitted it. Worst, he told her he didn’t love her anymore. 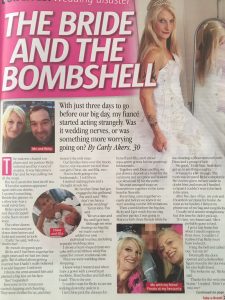 Carly in Take a Break

Devastated Carly hoped he would change his mind – she put his cheating on his stag do down to high jinks and him saying he no longer loved her down to wedding day jitters. She believed he would turn up on the day.

But when she rang him on their wedding day he told her it was off. In tears Carly left her wedding dress on the bed and went downstairs to tell guests waiting there that the wedding was off.

Her two daughters were in pieces. So instead of the wedding dress she planned on wearing she went ahead wearing one of the bridesmaid’s dresses – and walked down the aisle with her daughters in the two dresses they’d bought.

They still enjoyed the cake that was made and rather than waste it, Carly went on the honeymoon.

Ricky told Featureworld as it was a double wedding, she didn’t have to go. He said he told her three days before the wedding it was off. While he admits he went with a girl on his stag do, he claims it was Carly who cheated first and he decided he couldn’t get married.

Carly denies ever cheating and she is still absolutely distraught. 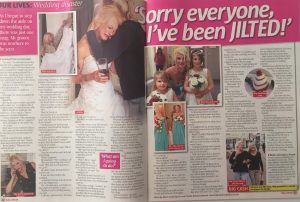 Carly’s story appeared over three pages of Take a Break…

A wedding day is supposed to be the best day of a woman’s life but for Carly it turned out to be the worst.

Carly’s brave story appeared on the cover and over three pages of Take a Break magazine!

Are you a jilted bride? If your wedding ended in tears, then the silver lining is you can sell your story… contact me to find out how >>>

Category: Stories sold in 2016, Stories sold to a magazine, Take a Break storiesBy Alison Smith-SquireAugust 9, 2016
Tags: Relationship stories
Share this post
Share with FacebookShare with TwitterShare with PinterestShare with LinkedInShare with WhatsApp