A while ago we placed the story of how Jim Higgins faced criminal prosecution after tidying up a fence and some brambles along a footpath at the foot of his garden in the Daily Mail newspaper. 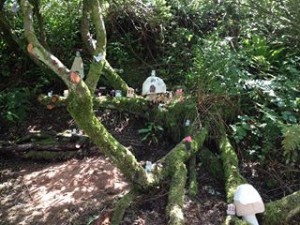 Now news reaches us of Jim making headlines again. This time he is in his West Cumbrian local paper after creating a fairy village.

Father of six and grandad of two Jim, 66, began by placing pieces of ‘fairy furniture’ along the Moor Row cycle track near his home in Whitehaven.

The little haven thrilled local children who have now brought their own treasures there to join it.

Unfortunately Jim is still being questioned by Police regarding his tidying up of a fence, brambles and creating a seat on land which belongs to Sustrans.

Selling a personal story?  At Featureworld we offer a bespoke personalised service to all clients which also offers after care even after your story has appeared in a newspaper, magazine or on TV. Find out more by contacting Alison.