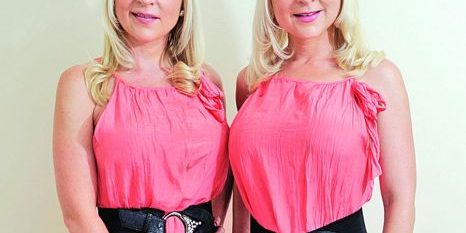 Story in THE SUN newspaper… 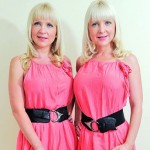 The twins, 38, who live in Hertfordshire, have always done everything together – from beating Chickenpox to taking ballet lessons.

So when in January 2014 they had a boob job – to remove faulty PIP implants and replace them with new ones – they both had their ops on the same day with the same surgeon.

Kerry decided she wanted to be a little bigger than before. So to ensure they couldn’t be told apart, Jo decided to go larger too. The twins, both mums of two, therefore went from a DD to an E cup. 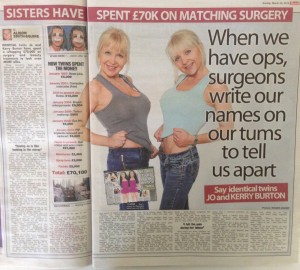 But this is far from the first time Jo and Kerry Burton have undergone the knife together to enhance their looks – and ensure they remain identical and that they age the same way together.

The sisters have spent thousands of pounds on a host of operations in the past. They have all been carried out by the same doctors at the same time.

For some ops they’ve even had their initials written on their bellies so the surgeon knew who was who.

As twins they’ve both felt one another’s labour pains and regularly finish off one another’s sentences. They shop together and will buy outfits that suit in different colours.

Both work as beauticians and live around the corner from one another. Kerry is separated with a son aged six and daughter, three while Jo lives with her partner and has a daughter, 12 and ten month old baby girl.

Their amazing story appears in The Sun on Sunday. They have now to appeared on national TV.

Jo and Kerry are two of Featureworld’s longest standing clients and as media agents we have represented them since 2000!

Are you one of twins? If you and your twin (or triplet!) have a quirky story to sell together then contact us using the form to the right of this page >>>