Ever since she appeared on the front page of The Sun about her NHS boob job to become a model, Josie Cunningham has been popping up in our newspapers and magazines. 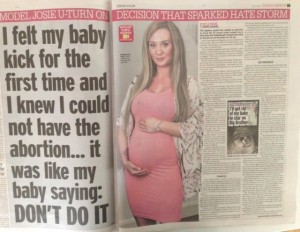 One of Josie’s articles…

For a while Josie – who has never made a secret of her desire to become a famous ‘celebrity’ appeared to have discovered a successful way of gaining press publicity – saying or doing something outrageous guaranteed to spark headlines.

Over the past few months various stories have appeared in the press. In one she says she regretted her free boob job and then she was going to sue the NHS for giving her the surgery. Then she was getting free dental surgery and she was pregnant either by a footballer or a surgeon – she didn’t know which was the dad as it happened while she was working as an escort.

But it seems it all went too far recently when 19-week pregnant Josie told how she planned to abort it because she wanted to appear on Channel Five’s Big Brother. “I’ll get rid of my baby to star in Big Brother,” she said, “This time next year I won’t have a baby. I’ll be famous instead.”

Channel Five has of course distanced themselves away from her claims, saying they never would have had her on the show anyway.

But her announcement in the Sunday Mirror caused an outcry – the Daily Mail’s Jan Moir called her ‘callous and shameless’ and she even had death threats.

Now she has turned round and in a Sunday Mirror follow up says she is keeping the baby. She felt the baby kick, she says, and that made her realise she wanted to keep it.

So has all of this havoc caused simply been on big publicity stunt?

In a way – yes of course it has been. Here is a young woman – she is only 23 and yet she already has two children – desperate to change her life, and she believes getting famous by any means will do just that. And she believed all these shocking stories were the way to go.

No-one except Josie knows whether or not she was just saying she was going to have a termination to make another story or if she were truly booked into a clinic and really planned to go through with it.

But, clearly she decided quite early on that she could cope with all the public criticism – and that saying she was going to end her unborn baby’s life was simply going to be another story. “I’ve been hated all my life by bullies at school and then by the public over my boob job,” she tells the Sunday Mirror in explanation in their follow-up story about her changing her mind, “People are going to hate me, so at least I was getting famous in the process.”

But the bottom line is, while she has come over as openly selfish, Josie has it seems always told the truth.  We therefore believe it’s a huge shame she has been vilified as she has been. Looked at another way, her candid admissions have raised issues that otherwise might not have been known about…

After all, it was not her fault that the way the NHS is run, that she was able to get a boob job for free when some people can’t get cancer treatment to save their lives. When she stated in another story that she was going to get £2,500 work of dentistry for free because she was pregnant and entitled to it, she will hardly be the only expectant mum to take advantage of that benefit.

And while she might be the first person to openly admit wanting an abortion to further her career, she certainly won’t have been the only woman who has considered that. We are absolutely sure there will be many actresses, singers, dancers, models and businesswomen who have gone ahead (albeit in secret) with a termination for exactly the same reasons.

The great shame is that the hate has been directed at her and not at the NHS rules that have allowed this to go on. At the same time, maybe we should be investigating the practice of zoo-like TV shows, which appear to attract vulnerable people, the often unfair contracts they expect those people to sign and why Josie Cunningham ever believed aborting her unborn baby would help her get on such a show.

Meanwhile, let’s hope she realises that coming over as nasty and selfish is far from the only way to gain publicity and that long-term it’s impossible to keep the publicity bandwagon running unless you have something more to give.