Only recently at ‘sell my story’ website Featureworld, we described Katie Price as the queen of selling the ‘self’ real-life story. 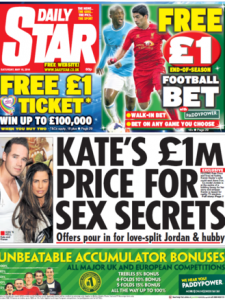 Not so ‘cheap’ headlines…

We were commenting on her extraordinary ability to literally sell gossip about herself – and our post came hot on the heels of Katie’s ‘Sun exclusive’ about how she had no idea she was six months pregnant with another baby so soon after giving birth to her fourth child.

But that was only a taster of the publicity train that was to keep on running this week. No sooner were editors back from their bank holiday weekend break, Katie Price was hitting the headlines again this time announcing on Twitter her husband Kieran Hayler (and as with every player in this drama, apart from Katie Price, I have to look his name up as until this week I’d never heard of him) was having an affair with her best friend and she was divorcing him.

Is it true? Well best friend Jane Pountney (another person I’d never heard of before) has now duly put out a statement admitting it. And the whole story about Katie’s betrayal and devastation, and while she is pregnant to boot,  has been played out regularly topping Mail Online’s website and featuring in every tabloid paper.

Of course at Featureworld we love real life stories. Relationship stories, the twists and turns of human emotions and what makes us all tick are our speciality.

So why have we not been as interested as we should be in this latest Katie Price scandal?

Maybe it is because instinctively the story seemed to appear too easily and in our opinion has felt contrived – as if the press is being manipulated.

How, for example, did all the photographers know all of them were conveniently going to be at the same house for a tearful show down?

Usually if celebrities break up, they tend to hide away. Yes they might make a short press statement via their publicity agent but rarely is everyone in the whole scandal so readily photographed by the paparazzi as this lot have been.

Normally papers will be scratching around to find photos of all the parties involved in the scandal. But in this tale everything – from the apparent ‘show down’ between everyone to the statements admitting the infidelity – has been given, it would appear, on a plate to journalists.

Is it staged? Is this affair even real? Often this week it’s felt like a soap playing out on the front pages. It could quite easily be an episode of Eastenders or Towie.

And we’re not the only ones to wonder if much of this has been engineered – or at least made the most of – to get Katie Price back into the headlines.

In an article in the Daily Mail, journalist Helen Weathers writes: “Some cynics suspected the whole story had been fabricated for cheap publicity.”

Meanwhile, PR consultant and author Mark Borkowski says: “It’s a bit like Marks & Spencer and Tesco – you may have loyal customers but you have to keep bringing out new lines to keep them interested.’

The danger, he warns, is that the success of her strategy to sell her private life depends entirely on the public’s willingness to engage with her story. “Once that goes, you’re in trouble.”

Katie Price denies anything is for a publicity stunt. She is said to have told friends, “Why would I humiliate myself for a few cheap headlines.”

Her spokesperson is also quoted in the Sunday Mirror claiming rumours of any sort of publicity stunt are completely untrue. ‘It is a shame at a time of considerable distress to Kate that people are attempting to make a number of false allegations – it is spiteful and unnecessary. Kate is struggling to understand what has happened let alone decide or think about selling a story.’

He was responding to an article by Emma Pryer that claims Katie Price’s profits have plunged since her heyday when she was with Peter Andre. ‘Overall profits have continued to fall as she lurched from one disastrous relationship to another,’ says a source in the feature.

However, the tabloids seem to be lapping up the drama so clearly they believe readers are riveted by Katie Price. And drum up enough interest and all parties could end up selling their stories to various newspapers.  Indeed the Daily Star reports she could earn a million for her first interview about her marriage break up.

The whole ‘crisis’ might even spark another Katie Price real life TV series to come with more jaw dropping revelations. Perhaps the next twist will be “Katie forgives her husband – how we stayed together despite our affair” or “Katie is bridesmaid at her best friend’s wedding”.

The only question is will the public continue to be riveted enough to want to actually buy those papers and read what happens next. That remains to be seen…