Katy Bassett – who became anorexic during her pregnancy – appears in NEW! mag… 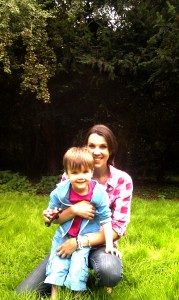 At Featureworld, we don’t just forget about your story after it’s been sold! In fact, we are constantly on the look out for new opportunities for our interviewees to get their stories out there and earn some extra money too!

Katy Bassett’s amazing story about how she became dangerously anorexic during her pregnancy, has already appeared in a number of publications including the DAILY MIRROR, the DAILY MAIL, and ITV DAYBREAK and her story has been sold around the world to countries such as Japan and France.

But we are delighted to have placed Katy’s story in New! magazine, which was compiling a special report into anorexia in pregnancy.

The New! report followed a recent survey by the University College, London that showed of 700 women questioned, a quarter said they were ‘highly concerned about their weight and shape.’ However, alarmingly, two per cent of those were found to fast, exercise excessively, induce vomiting and misuse laxatives or diuretics to avoid gaining weight during pregnancy. 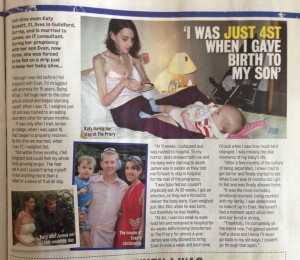 Featureworld interviewee Katy told how she became so severely anorexic during her pregnancy with son Evan, she’d had to be admitted to hospital and drip-fed. When she got an infection, Evan was born prematurely but although he thrived, Katy’s anorexia worsened and she ended up in The Priory for almost a year.

Thankfully we can report that Katy, who is married to James, is now fully recovered and a doting mum to Evan, a healthy and active little boy!

Have you suffered pregorexia or any other eating disorder? Inspiring stories where people have recovered from an eating disorder such as pregorexia, anorexia or bulimia are very popular with women’s magazines and national newspapers.  At the same time as showing other sufferers you can overcome such an illness, you can earn a nice fee! Contact us to the right of the page if you would like us to consider your story>>