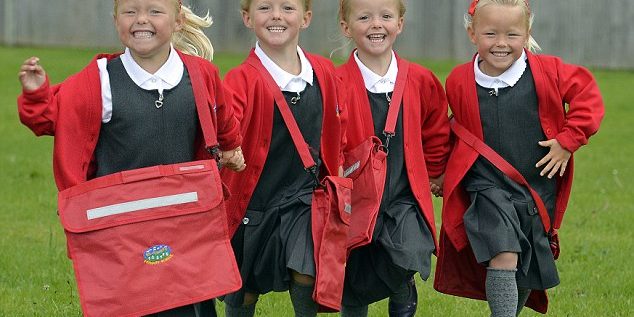 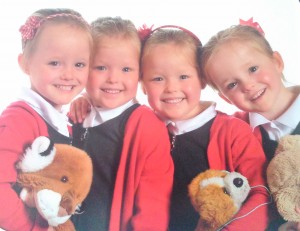 I am bowled over by how delightful and grown up quadruplets Heidi, Annabelle, Jessica and Hannah are!

I last featured them, again for the Daily Mail, when they were two years old and it was Christmas. How time flies… now the little girls – two sets of twins born to Sean and Lisa Kelly on 27th December 2009 – are four and about to start school.

I thought this milestone would make a lovely piece. The Daily Mail agreed and sent photographer Bruce Adams to picture the first moment they tried on their brand new uniforms.

See the stunning photos of the girls in their new uniforms and the full story in the Daily Mail. You can also read more on the family’s story, which appeared on page three of the newspaper, below…

As quadruplets they’re already used to sharing everything from birthdays to toys.

But Heidi, Annabelle, Hannah and Jessica Kelly are about to set out on their biggest shared adventure yet– starting school. 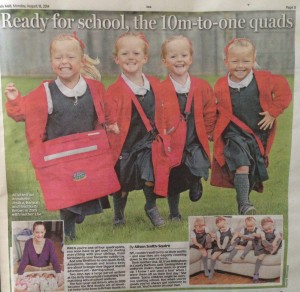 In the Daily Mail…

The girls – the first quads who are identical twins to be born in Britain – couldn’t wait to try them on. Now the excited little four year olds are on count-down to the brand-new term.

Mum Lisa Kelly, 38, said: ‘Seeing them in their school uniforms makes them seem so grown up. I feel so proud of them – yet at the same time it brought a lump to my throat. I know I will shed a tear when I wave them off on their first day.’

The mum of five, who with husband Sean, 39,  an electrical designer,  also has older son Cameron, 13, admits teachers might have a difficult time telling the girls apart.

She says: ‘The girls went to the nursery attached to the school so they are known to many of the staff. But to help teachers who don’t know them, I plan to put hair ties with different coloured bobbles in the girls’ hair – with blue for twins Jessica and Hannah and red for twins Heidi and Annabelle.’

However, Mrs Kelly says her daughters have all developed their own style and while initially people are confused they soon realise each one is very much an individual. ‘Heidi is a real tomboy,’ she says, ‘but Annabelle is a true girl who adores her dollies, Jessica is a live wire who’s always up to mischief while Hannah is much quieter.’

Each set of twins shares a bedroom at the couple’s four bed-detached house in Billingham, Cleveland. But says Mrs Kelly, ‘ they are so close that even now they still adore to snuggle up together and we always find they’ve crept into one another’s beds in the morning.’

The youngsters created a sensation when they were born on 27th December 2009. The 10 million to one quads were the first born in Britain who are two sets of identical twins and are the miracle children the Kellys never thought they’d have.

Originally the couple simply wanted a sibling for their son Cameron. But after failing to conceive naturally a second time they spent £9,000 on IVF and to their delight found they were expecting quads after the third attempt.

The girls – the result of two fertilised embryos put back into the uterus that both grew into two sets of identical twins – were born healthy at 31.5 weeks after a problem free pregnancy.

Twins Heidi and Annabelle both weighed 3Ib 3oz while Hannah and Jessica were 2Ib 10oz and 2Ib 11oz .

Recalls Mrs Kelly, who took a career break to raise her family but plans to return to work as a nurse in the autumn: ‘Overnight our lives changed and for a while it was chaos. We went through two washing machines and tumble dryers in two years and ended up doing what used to be a family grocery shop once a week, every other day.

‘As they’ve grown up everything has had to be done in fours. Four sets of clothes, four matching toy pushchairs, four identical scooters – Christmas and birthdays take lots of planning.

‘But we’ve always felt extraordinarily lucky to have a big family. Even now the girls still attract attention – people still stop us when we’re out say how beautiful they are.’

Meanwhile she believes having the four together is a blessing. ‘When they were tiny babies and then wilful toddlers life was tiring but now they’re older they get on so well and there is always someone to play with.

‘Some children might be nervous starting full time school for the first time. But when you’re one of quads you’ve always got someone to lean on. You’re never on your own.’

Are you expecting twins, triplets, quads or even more? Or perhaps you are one of triplets or quads yourself? If you have a similar story to tell contact me using the sell my story form.