Update: April 2015. Kerry has given birth to a third little boy three months early and the couple, now in Northern Ireland, hope this baby will remain with them. They also hope to be reunited with their other two sons.

Read more and see Kerry with her new son in the Daily Mirror. 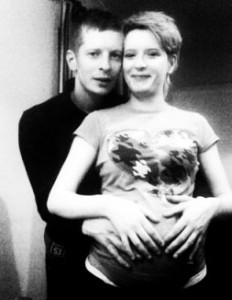 Mark and Kerry. Five years ago . The couple were expecting their first baby and about to get married, when social workers stopped their wedding – because they deemed Kerry, who has mild learning difficulties, was to unintelligent to understand the vows.

Five years ago Mark and Kerry McDougall contacted me at Featureworld for help. The couple were expecting their first baby and about to get married. But then social workers stopped their wedding – because they said Kerry, who has mild learning difficulties, was to unintelligent to understand the vows.

The couple eventually fled to Ireland. But their baby son was taken into care shortly after birth by social workers.

Thankfully after a lengthy and emotional legal battle the couple were assessed by Irish Social workers as perfectly capable. They got their son back. As I reported they went on to have a second son, living in Waterford.

But, they always wanted to return home to their Scottish roots in Fife where they have many family and friends. And a year ago I wrote the story about how Kerry and Mark had returned to the UK with their children.

Unfortunately, despite believing their nightmare was behind them, within weeks there was a knock at their door and social services began investigating them again.

It led to both the sons being taken into the care of social services.

Kerry and Mark McDougall in The Sunday Telegraph newspaper

MP John Hemming has been helping to advise the family and recently mentioned their plight in the House of Commons. He said the family have been ‘on the receiving end of vindictive proceedings.’

Writing in his column in the Telegraph, Christopher Booker explained: ‘Fife social workers eventually got their way and took the boys very unhappily into “care”, all the indications were that they would be returned home.

‘To the astonishment of the family’s capable legal team, the boys still remain in care, for their future to be decided by a “children’s panel”.’

He adds, ‘terrified that they might then lose their third child,’ Mark and Kerry have now fled to Ireland.

However, their lawyers plan further action and it is hoped they will be reunited with their sons soon.

I will keep you updated…

If you would like help and advice over a possible story, contact me using the form to the right of this page>>>