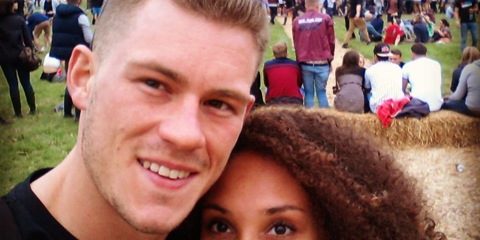 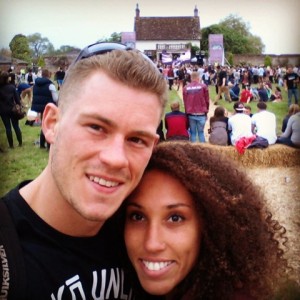 A spoof on the famous Levi’s Laundrette Advert – where a hunky guy strips off to his undies – has been launched by a charity.

Now disabled model Jack Eyers, 25, is set to follow in his footsteps as he stars in a similar advert set in a charity shop.

The raunchy ad, set to be made public next week, shows Jack – who has a false leg – stripping down to his boxers.

He then gives his clothes to the startled woman over the counter.

It is hoped the advert will encourage more people to give unwanted clothes for charity.

Jack was born with the rare condition Proximal Femoral Deficiency, which prevented the limb from growing properly. After being in and out of hospital as a child, at the age of 16 he made the decision to have his leg amputated. 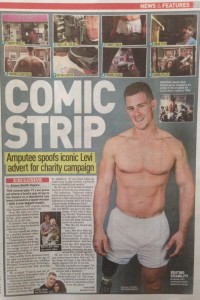 Story in the Sunday People…

His false leg enabled him to live a normal life and he became a personal trainer. After appearing in the Paralympic Games opening ceremony, he was then scouted by a model agency. He has since appeared in shoots for Barclays and Fashion firm boohoo.

Research commissioned by Scope found 94 per cent of women and 89 per cent of men admit to having anything from one to more than 15 items of unworn clothing.

Each bag of clothes donated to Scope raises an average of £20. Visit scope.org.uk/strip for details of Scope’s Great Donate campaign and to see the advert.

Read the story in the Sunday People newspaper and see the video here.

Featureworld regularly works on behalf of charities to help gain them valuable publicity and we were delighted to work with Scope on this feature. If you are a charity and would like some free advice and free help with public relations contact Alison at Featureworld for more details.