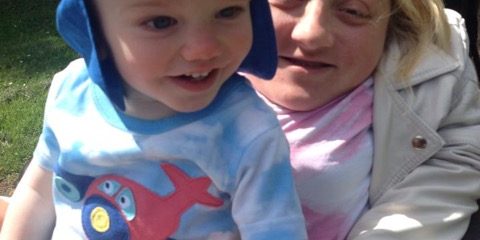 Tiny mum Marie Andrews tells That’s Life readers how life is going with son Mark who at 18 months is now taller than she is! 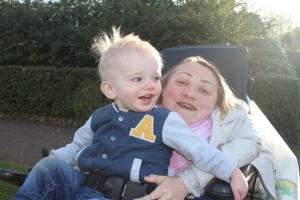 Marie has brittle bones disease which has left her unable to walk – and very tiny. But she was determined to have a baby and thanks to a surrogacy, Marie and her husband Dan fulfilled their dream.

Now their baby Mark is a toddler and towers over her. I placed the update in That’s Life magazine, which ran her story when Mark was just a few months old. You can catch up with Marie’s story below …

Wonderful story to sell to That’s Life mag? Contact me using the form to the right of this page>>>

Marie Andrews, 32, is half the size of her toddler son Mark…! 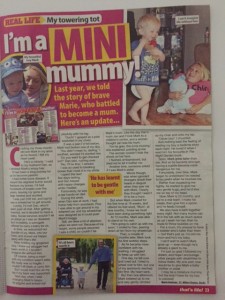 Hurtling towards me, my toddler Mark almost knocks me over.

“Whoa!” I shout as he grinds to a halt. He bends down and tenderly kisses the top of my head.

Mark is just 19 months old. But he is already twice my size.  I have brittle bones disease. Because of that I’m only two foot tall and any sudden movement could crush my bones.

At just three months old, Mark fractured my rib. He kicked out while I was changing his nappy.

Now I look up at him and he seems like a giant.

But whatever fun we’re having I never forget if he accidentally fell on top of me, I could be seriously injured.

So I always ensure I have my back against a wall to support me when I cuddle him.

I was just a few days old when doctors gave my mum Ann the devastating news I had brittle bone disease, osteogenesis imperfecta. My body doesn’t produce enough collagen – the ‘cement,’ which provides bones with strength and flexibility – and I can break an arm just reaching for a cuppa. I also had a twisted spine, respiratory and heart problems.

Mum had already lost my older brother Mark to the same condition and doctors also didn’t expect me to survive either.

Miraculously I did. But by the time I was eight I’d had so many fractures I was confined to a wheelchair.

I went to mainstream eventually leaving to work as a school receptionist.

He had popped in to talk about planets to pupils for a science lesson.

Then one day he said, “Do you fancy going out?”

At the end of the evening it seemed natural to kiss.

From then on we clicked.

In 2010 we moved into our three-bed bungalow in Milton Keynes Bucks.

Only while we travelled the world, what we wanted most was kids.

By then I’d endured over 200 fractures. I am unable to walk or even stand. Once I turned over in bed and broke my knee.

Sadly it was because my condition is so severe social services refused to even consider us for adoption. So we turned to surrogacy.

After marrying in June 2013 Mark was born, healthy 8Ib. I was the first person to hold him and I loved him straightaway. I couldn’t thank the surrogate enough.

Overnight our lives were turned upside down.

When Mark was a baby someone had to lift him and bring him to me. Now an assistant comes during the day when Mark is at work. She changes his nappy, lifts him into his highchair and straps him into a car seat.

It’s agonising that I can’t run after him or quickly pick him up if he’s fallen over.

But now he’s older I can call him to come to me. And there is a lot I can do. I always feed him myself, read to him and spend hours playing with him. I can follow him around in my wheelchair and I can drive myself.

At night I’m the one who gives him his bath – I sit in the bath with him to wash his hair – and if he’s unwell, I’m the one he wants most to comfort him.

When we’re out I will often hold Mark’s hand as he walks and I am in the wheelchair next to him.

People still mistake the assistant for his mum. Sometimes strangers think I am a child and Mark is my little brother.  And they often think Dan is my carer and not my husband.

It doesn’t annoy me but I always make it clear I am Mark’s mum.

But my disability doesn’t worry Mark.

He’s learnt to jump out of the way if I’m in my wheelchair.

He even seems to realise how fragile I am.  Rather than hugging me tightly, he’s very gentle and has even begun kissing me on top of my head. He even tries to lift me into my wheelchair.

And being a mum is a dream come true. Mark is the miracle baby I never thought I would have.

Being parents has brought both Dan and I so much joy.

And although we often both fall into bed at night shattered we wouldn’t have it any other way.”