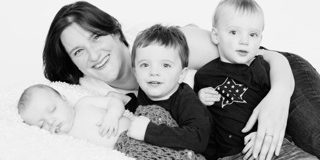 MAIL ON SUNDAY story via Featureworld…

I adore single motherhood, says mum of three who spent £30,000 creating her special family from donor sperm shipped from the US. 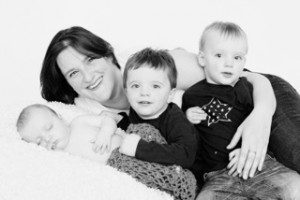 Luan and her adorable boys…

By the age of 35, Dr Luan Ferguson was flying high in her job as a child clinical psychologist  and she had everything money could buy. But one thing was missing from the doctor’s perfect life. With no Mr Right on the horizon she didn’t have any children.

So, she set herself a goal that by 40 she’d be a mum of three and decided not having a man in her life was no bar to creating her own family and embarked on private fertility treatment.

For some the decision to choose have family without a dad in her children’s lives is controversial. But Luan, a child psychologist who has worked in the family courts, points out that robust research proves children can be happier in a single parent family than with two parents if those parents are arguing and at war.

Sadly the first time, using sperm from a UK donor, she had a miscarriage. After that she decided to import sperm from the US. The reason was that while UK clinics could only give sketchy details of donors, Luan could choose her baby’s father from a list of donors in the US. She could ensure the father was the perfect, attractive, intelligent man – the ideal person to be father of her children.  Second time she got pregnant with twins but her joy was cut short when at 20 weeks she lost them. 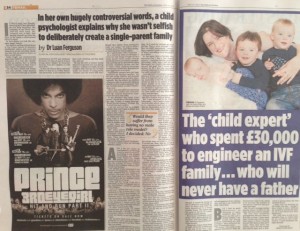 Yet all of this heartache didn’t deter her. She ploughed on and got pregnant again with twins, using the same sperm donor so the boys would be biological siblings.  This time she delivered healthy little boys. But she wanted wanted to make her family bigger and so when the boys were just a year old, went through the whole process again, having a third son in August 2013 shortly after their second birthday.

Her youngest son is now eight months while the twins are just over 21/2.

It has all come at a huge price – £30,000 for the IVF and importing the donor sperm. Plus she has found having three tiny children all under three and being a single mum totally exhausting. Although she has help from her parents who live nearby (and are delighted to have grandchildren they had once believed they might not have), the enormous cost of childcare means she has had to cut back on her work extensively. The result is scrimping and saving as she has never done before.

She knows some people won’t approve of what she has done and it won’t be right for everyone.

But Luan, who recently celebrated her 40th birthday, has never been happier and hopes other women whose biological clock is ticking will feel inspired by her story.

Luan’s story was placed in the Mail on Sunday newspaper where it appeared over two pages and on the website MailOnline.

You can read the full version in the Mail On Sunday newspaper.

Have you chosen to have a baby by yourself? If so we would love to hear from you and can let you know if your story might be suitable for a newspaper, magazine and television. Simply fill in the form to the right of this page>>>