From obesity to anorexia: How bride battled TWO eating disorders to marry the man who helped save her… Story in The Daily Mirror, Best and Chat mag…

Malissa has had a gastric bypass, beaten heartbreak and anorexia, and married the man who saved her life;… and she’s still only 22 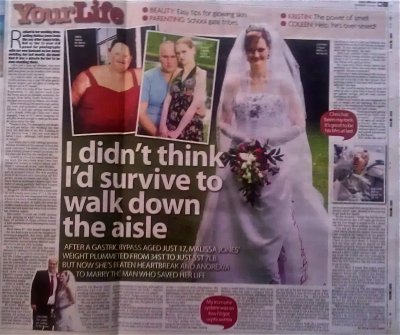 Radiant in her wedding dress, smiling ­Malissa Jones looks like any other happy bride.

But as the 22-year-old posed for photographs with her new husband on her sunny wedding day last month, she knew that it was a miracle for her to be even standing there.

Little over a year ago Malissa, who once weighed 34st and was dubbed Britain’s ­fattest teen, was given just six months to live, ­having become dangerously anorexic.

In a bizarre twist, she went from eating 15,000 calories a day to just 500 after gastric bypass surgery and the grief of losing her unborn son at 27 weeks.

But with the help of her fiance Chris Rowbottom, 23, she battled back from the brink and at an intimate ceremony, the couple, from Selby, North Yorkshire, tied the knot surrounded by friends and family.

“After everything I’ve been through, ­saying my vows was incredibly emotional,” says Malissa.

“A year ago, getting married was just a dream.

“Although Chris and I were engaged, I was so ill, I never imagined I’d actually be well enough to walk up the aisle, let alone enjoy the day.

“Thanks to him, I’ve managed to put weight on and get better. Our wedding day was truly the best day of my life.

“Looking at the photos now, I can see how much better I look — although I still need to put on weight.”

And while she is still battling anorexia, Malissa shudders at the amount of food she once consumed.

The eldest of four children from a family prone to weight problems, by the time she was five she weighed 4st.

“I picked up a lot of my eating habits from my mum.

“She lost a baby when I was very young and turned to comfort eating and I think it rubbed off on me,” says Malissa.

She was twice as big as other girls her age and at primary school she was ­scoffing double portions and spending all her pocket money on sweets and chips.

In her teens, Malissa developed a bizarre night-time habit of eating partially defrosted burgers and chicken nuggets from the freezer. 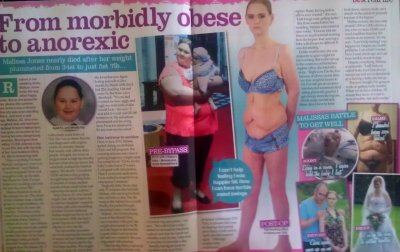 She was so obese that she was diagnosed with ­angina, a form of coronary disease that usually only affects older people.

At night, she wore an oxygen mask to help her breathing because when she laid down, her extra bulk crushed her internal organs.

She recalls: “I could eat 15,000 calories a day, gorging on eight king-sized Mars bars, 10 packets of crisps, endless rounds of ham sandwiches and takeaways for lunch and tea.”

Mum Dawn, 47 — who herself weighs 16st — did her best to try to curb her daughter’s enormous appetite.

But diets, pills and counselling all failed. And without proper intervention, doctors believed Malissa might not live to see her 18th birthday.

So in January 2008, she took the risky decision to undergo a £10,000 NHS gastric bypass in a last-ditch attempt to save her life.

Unlike a gastric band, which can be removed, the gastric bypass was an ­irreversible operation.

The six-hour op involved stapling her stomach so it was smaller and then cutting her ­digestive system, making it smaller, so food wouldn’t be ­absorbed easily.

After a week, she came home from ­hospital in York and as she was only allowed a liquid diet for the first three months, the weight dropped off.

At first, Malissa ­loved her new figure, embracing her extra energy by going out ­clubbing and ­drinking with her friends.

But there was a drawback to her rapid weight loss.

“No one had warned me how saggy and ugly my extra folds of skin would look,” she says. 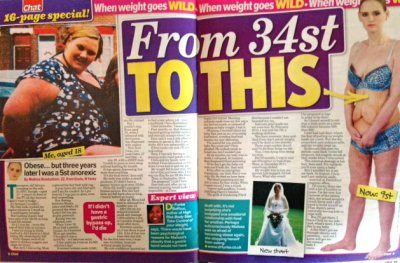 “My self­-esteem plummeted and for a long time, ­although no man ever criticised my body, I was too ashamed to let any man see me naked.”

In June 2010, things started to look up when Malissa began dating old friend Chris, a farmer, and she was delighted to find herself pregnant.

It was then that the seeds of her anorexia were sown.

A combination of morning ­sickness and fear of putting weight on ­during her pregnancy meant Malissa became scared to eat.

“I tried to force myself to eat and drink properly for the sake of the baby, but at 27 weeks I collapsed with dehydration.

“My immune system was so low I’d contracted septicaemia.

“I had to be rushed to ­hospital for an emergency caesarean to save not only my unborn baby’s life but my own.”

Tragically, baby Harry, who weighed just 16oz, died only 57 minutes after being born.

Malissa, who never got to hold him, fell into a coma.

For four weeks, her life hung in the balance, but then she finally pulled through, coming home a week later.

Overcome with grief, ­Malissa, who has kept a memory box of photos and Harry’s blanket, still wasn’t able to eat.

Her weight plummeted to 5st 7lb and she started to feel the bypass that had saved her life had now ruined it.

Malissa was so severely ­underweight that over the next few months she ­collapsed several times and doctors diagnosed her with anorexia.

But with Chris’s help, she fought her eating disorder. He even gave up his job to be her full-time carer.

“After having Harry, I was surviving on a few hundred calories a day — just pureed ­vegetables and mashed ­potato,” she says.

“But slowly, with Chris’s help, I started to eat toast for breakfast, yoghurt with fruit for lunch and a healthy meal of meat and veg for tea.

“I also tried to eat a chocolate bar a day. In hindsight, I don’t know how he coped with it. But he was always there, tempting me with little meals.”

Steadily, her figure took on a healthier look and Chris proposed in February 2011.

Then in January this year, she had her first period since Harry’s birth and Malissa was amazed when in April she became pregnant again.

“It was unexpected but Chris and I were over the moon,” she says.

“Although another baby could never replace Harry, having children and being a family is all I’ve ever wanted.

But tragically, three weeks before her wedding and when she was nine weeks pregnant, ­Malissa miscarried.

“Chris and I were devastated.

“My doctors explained that the problem is I have so much internal scarring from the bypass that ­carrying a baby to full term will always be difficult,” she says.

“It was heartbreaking thinking that I’d never be able to give Chris a family.

“He kept me upbeat, though, and we even started discussing adoption.”

Unlike most brides, she was ­desperate to put on weight for her wedding.

But in the run-up to her wedding at Pontefract register office, she actually lost half a stone.

“Rushing around ­getting everything ready was stressful ­— although it all went off without a hitch,” she says. ­

“Afterwards, we put the sadness b­ehind us and had a great honeymoon in Blackpool.”

Still under the care of her local specialist NHS eating ­disorders and mental health team, Malissa is determined to get back her health.

“At the moment I weigh 9st, but because of all the excess skin I still have, my doctors say my true weight is nearer to 7st. I admit I do still worry about putting on weight.

“I’ve still got the anorexic mind-set and I find eating physically painful sometimes.

“I get cramps in my tummy from the gastric bypass, which make me feel sick.

“Some days I have to force food down. It doesn’t help that my body isn’t able to absorb all the nutrients properly because of the bypass.”

However, Malissa estimates she now eats around 1,500 to 1,800 calories a day — a far cry from the 15,000 she was consuming when she weighed 34st and much healthier than the 500 calories a day she was eating as an anorexic.

Yet she says: “I know this might sound ungrateful, but I can’t help but feel I was happier being fat.

“Despite my health ­problems, I ate what I wanted and I was always bubbly and happy.

“Now, I have to regularly see doctors for check-ups and can have terrible mood swings.”

Despite everything that has happened, Malissa is optimistic about the future.

“Chris has been my rock all the way through,” she says.

“I still hate my body without clothes on but he always fancies me. And it’s ­wonderful to be his Mrs at last.

“We’ve even decided to give having a baby one last go. I’m just going to concentrate on getting into better health first,” she explains.

“When I do have children, though, I’m ­determined they’ll be brought up ­differently.

“I’ve learnt the hard way how important it is to have a healthy diet and to exercise.”

To see more publications Malissa has appeared in, click HERE

Have you overcome an eating disorder or health problem to achieve your dream? Contact us HERE