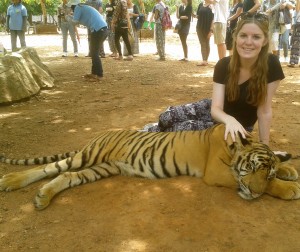 Isabelle with one of the tigers before she was mauled. Copyright: featureworld.co.uk

When Isabelle Brennan went on the trip of a lifetime with her sister and some friends, the last thing she expected was to be mauled by a tiger.

Isabelle, 19, suffered a severe bite after petting the ‘friendly’ animal during a trip to Tiger Temple – one of the biggest tourist attractions in Thailand and one of the few places in the world where visitors can stroke a tiger.

“One minute I was stroking its back and the next it had turned on me,” she says, “everything happened so fast I didn’t realise how bad the bite was until I saw blood gushing out everywhere. Luckily one of the keepers managed to pull the tiger off and my sister dragged me to safety. Meanwhile, some friends tied my leg to try to stem the bleeding.

“I was shaking with shock. But it’s only now I look back and realise it could have been so much worse. I am so lucky I got away. I could have died.”

The Human Sciences student, who is at UCL London, was rushed to hospital after suffering the mauling on her inner left thigh.  After the wound became infected, she ended up in hospital for a fortnight suffering from a fever. She has since been in a wheelchair and on crutches for a month before flying back to the UK. And is still learning to walk following the attack at the beginning of last month.

Isabelle had been on the holiday of a lifetime with her sister and some friends when they decided to visit tourist attraction Tiger Temple. 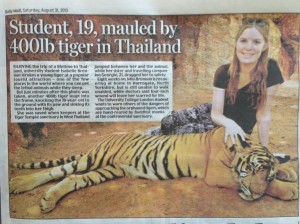 Isabelle in the Daily Mail…

She needed tens of stitches and will be left with a scar.

Isabelle said the Tiger Temple staff were very upset and concerned. They paid for her hospital treatment and visited her in hospital. They also explained the tiger was just playing – and those animal lovers can be reassured, nothing untoward was done to the tiger after this incident. But Isabelle wants to raise awareness and make other tourists aware the tigers might not be as docile as they look.

Isabelle said “It was terrible ringing my parents in the UK and telling them I’d been mauled by a tiger. They couldn’t believe it.”

Tiger Temple in the western province of Kanchanaburi – about 80km from Bankok – began life in 1999 when the first female cub was brought to Wat Pa Luangta Bua Yannasampanno, a Buddhist sanctuary, and was cared for my the monks. There are around 90 tigers, mostly Indochinese tigers – which like all tigers use their body weight to knock prey to the ground, killing with a bite to the neck.

·      For a basic entrance fee – or ‘donation’ visitors get a tour of the site and the chance to pet the tigers while they sleep.  They can pay extra to be photographed with a tiger’s head resting on their lap or watch the cats playing in the pool.

·      However, the Tiger Temple has been dogged by controversy with some people claiming the big cats are sedated to allow tourists to have their pictures taken with them.

Have you had a terrifying encounter with an animal? If you have a story suitable for a newspaper, magazine or national TV, then contact us via the sell my story form to the right of this page…