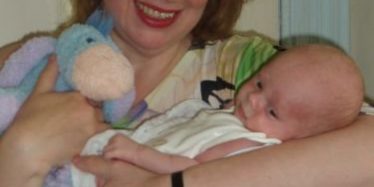 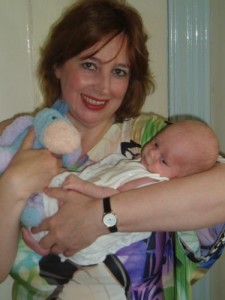 Susan, 52, remarried her first love after almost 30 years and conceived first child on their honeymoon.

* Now aged 52, gave birth to Byron when she was 48 beating millions to one odds.

* Dad is her first husband – whom she divorced 30 years earlier and remarried a second time.

At the age of 52, the last thing Susan expected was to be running around after a boisterous toddler…

After marrying at the age of 18, Susan and her husband Alan fell out and divorced at the age of 20. The couple didn’t speak for almost 30 years but then found one another on friends Reunited and decided splitting up was a terrible mistake. Within four months they got married in Las Vegas and against all the odds just three weeks after they came back, Susan discovered she was pregnant.

Susan had never been pregnant before and has no other children. Alan – who has a daughter from a previous marriage – was shocked.

But not as stunned as her GP was. He nearly fell of his chair when she said she was expecting a honeymoon baby. And her pregnancy was treated with horror by the local hospital who told her she was very unlikely to have a healthy baby. But Susan enjoyed pregnancy and at the age of 48 she gave birth to Byron, by caesarean, who is now a healthy little boy aged four. 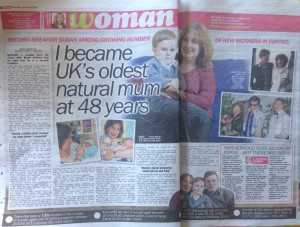 A number of mums do have babies in their late forties and fifties by IVF. And a tiny number have managed a natural pregnancy at this age but they have usually already had a child. By the age of 48 many women will have gone through – or be going through – the menopause. But Susan is delighted to have Byron and has never felt too old to have him.

Fertility experts told Featureworld that by the age of 48, even if a woman is still having periods, she is likely to need a donor egg and IVF treatment to conceive.

Susan’s record-breaking story has already been placed with a leading weekly women’s magazine. She is editor of Happy Families Online.

Sell your story? Have you become a first time mum – or just had a baby (even by IVF) – in your late 40s or 50s? If so we would love to hear your inspirational story. Contact us for a free appraisal of your story using the form to the right of this page…