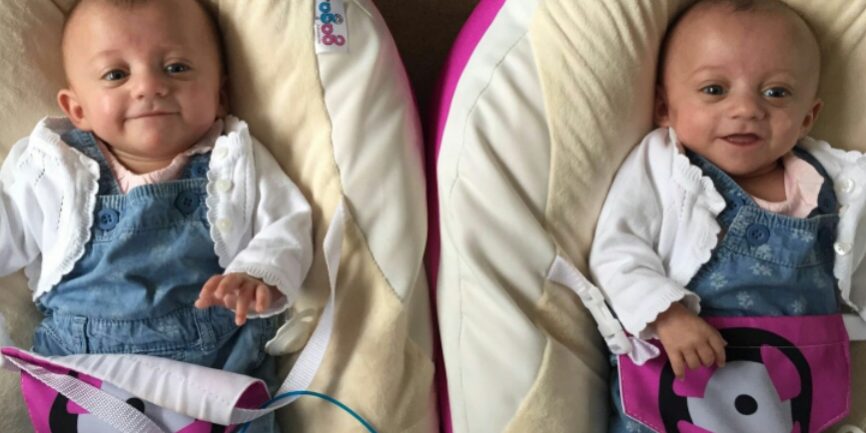 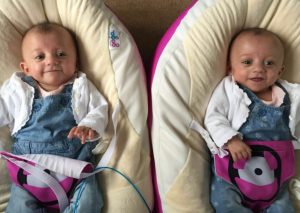 Meet the tiniest-born twins to survive in Britain.

Little Rylea weighed only 15oz and her sister Robyn just 1Ib 3oz after they were born at 23 weeks – a week before babies are deemed officially viable.

The world’s smallest surviving twins are Rumaisa, 9.2 ounces at birth and her fraternal sister Hiba, 1Ib 4oz who were born at Loyola University Medical Centre in Maywood, US in September 2004. And doctors are under no obligation to give a baby born under 24 weeks intensive care as the chances of survival are so slim.

But adorable Rylea and Robyn have proved everyone wrong. Today, aged nine months – while still tiny – they are still wearing clothes meant for newborns – they are growing up to be perfectly healthy.

After five months in hospital proud parents Claire Cunliffe and her partner Jason Comer finally brought their gorgeous little girls home to Cheadle, Cheshire where they are are now laughing and trying to sit up.

Doctors feared the tots were so tiny they would not survive the night – and the next few months were a rollercoaster as the twins battled infections and set backs due to their extreme prematurity. 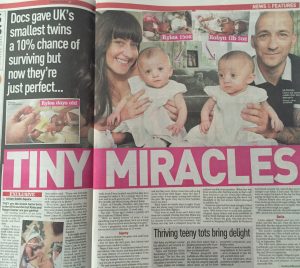 Rylea and Robyn with their proud parents in the Sunday People!

Claire said: “Doctors have told me the twins are the tiniest they’ve ever known to survive with Rylea being extremely small.” However her daughters are reaching all their age adjusted milestones and are believed to be completely healthy.

Archie and Harley Garthwaite, born at 22 and a half weeks, are believed to be Britain’s most premature twins. However they weighed 1Ib 40z and 1Ib 6oz.

Keith Reed, CEO of Twins and Multiple Births Association (TAMBA) said: “These are certainly the tiniest surviving twins that we are aware of. It is unusual for babies to be born this early and go on to thrive so well, so the fact they are meeting all their developmental milestones is wonderful news.

“Twins, triplets and multiples are often born earlier than a singleton pregnancy with 50 per cent of babies spending some time in a neonatal unit. Women pregnant with multiples are often alarmed when they are automatically classed in the ‘high risk’ category, especially when most go on to have uneventful pregnancies and healthy babies. But we want to send our heartfelt congratulations to their parents – we’re so pleased to hear the girls are both doing well.”

More information about parenting multiples can be found on www.tamba.org.uk

Meanwhile you can read the full story and see gorgeous photos of the whole family in the Sunday People newspaper.

Do you have an extra special baby? Why not celebrate with a feature in a national newspaper? Contact me to find out how >>>