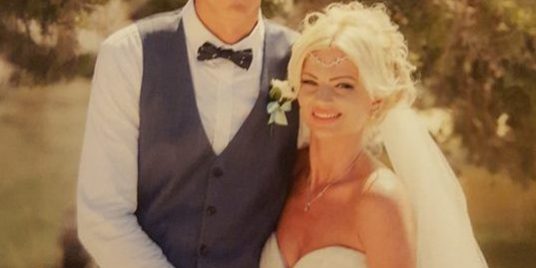 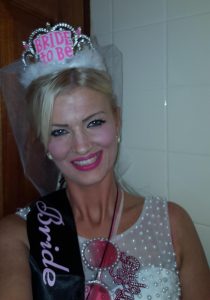 Melissa on her hen night!

Would Melissa Pittaway, 32, and her fiance, 30, ever get wed? It seemed as if everything was conspiring against them…!

When their original wedding venue in the UK cancelled on them, Melissa and her then fiance, Ben, were devastated. More bad luck followed when the caterers they booked ran off with their deposit.

But soon they came up with what seemed like a great idea – getting married aboard. And they decided on Greece.

But five weeks before she was due to fly for her big day Melissa broke her leg after falling over steps on her hen night.

Unfortunately she needed surgery and metal plates put into her leg.

Then she had to wear a metal boot.

But whether or not she would be able to walk up the aisle was one thing – doctors said her leg would take at least six weeks to heal. Luckily a week before she was due to fly, she was given the medical all clear to go.

However, she then got more bad news. Her best friend, who was her maid of honour cancelled. She had anxiety issues and couldn’t face flying.

At last the couple got to Greece. But as Melissa stood in her wedding dress waiting to walk up the aisle, she was told there was another wedding ahead of them. That meant a 30 minute heat in stifling heat while her make up melted. 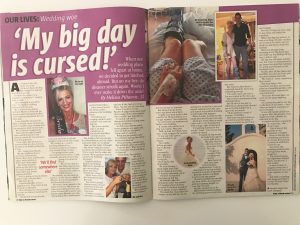 Melissa in Take a Break!

Finally they were wed – although Melissa couldn’t dance as she couldn’t put weight on her leg – it was a marvellous day.

But bad luck still dogged her. On arrival back in the UK she felt unwell. Her leg swelled enormously – it had become infected and she needed strong antibiotics.

Despite everything bank worker Melissa can laugh about it now – just. At least she will never forget her big day!

Wedding story for a magazine? Simply fill in the sell my story form to the right of this page >>>

Category: Stories sold in 2017, Stories sold to a magazine, Take a Break storiesBy Alison Smith-SquireFebruary 9, 2017
Tags: Relationship stories
Share this post
Share with FacebookShare with TwitterShare with PinterestShare with LinkedInShare with WhatsApp