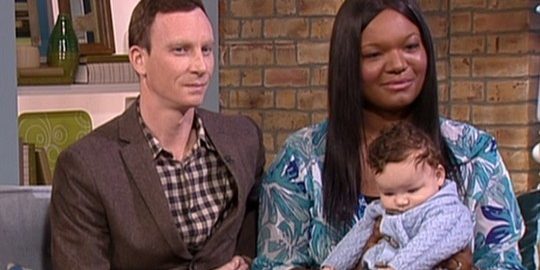 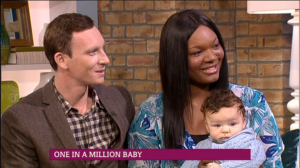 The Howarths on ITV This Morning…

After appearing earlier this week on page three of the Daily Mail – where their story gained over 600 comments and was one of the best read online – I was delighted to arrange for Catherine, Richard and baby Jonah Howarth to go on ITV This Morning.

Catherine is black and although husband Richard is white, the couple were amazed when Jonah was born completely white as they expected he would have darker colouring.

Interestingly many comments on Mail Online were wondering why Jonah was a ‘one in a million ‘ when Richard is white. But the couple appeared on ITV This Morning with a scientist who confirmed that because there are so many variation of skin colour that Jonah could have inherited,  there is only a one in a million chance that he would be born white as he has been. He is also only has a one in a million chance of having a sibling who is white as it is much more likely any brothers and sisters Catherine and Richard have for him will be much darker.

But little Jonah, who has been signed with five model agencies, was truly the star of this show – so laid back and happy – so it’s not surprising that since appearing in the Mail, demand for him as a model has been high.

The family are now set to appear in a magazine!

Want to appear on ITV This Morning? If you would love a spot on this extremely popular show, contact me using the form to the right of this page>>>