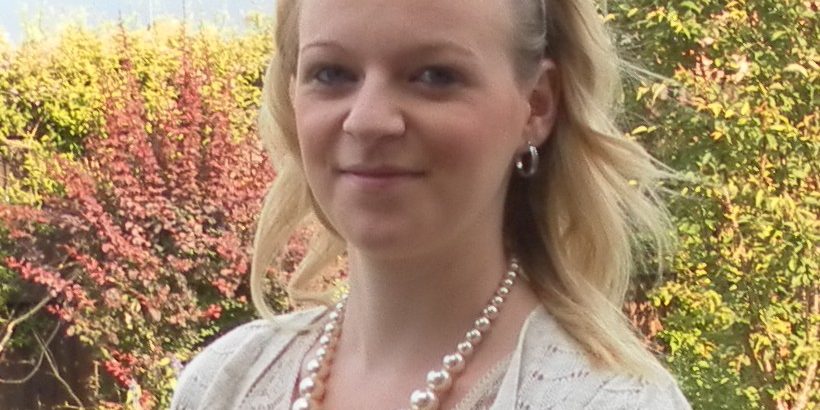 Story in CLOSER magazine. Expecting her first child Natalie Brazil’s morning sickness was so severe she was forced to terminate her pregnancy… 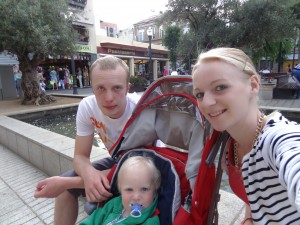 Natalie can relate to the Duchess of Cambridge, who suffers from severe morning sickness.

At nine weeks pregnant she was so unwell with hyperemesis gravidarum she decided to terminate her unborn baby.

Got pregnant with a second only to suffer the same – but this time she had support and managed to continue. She is now mum to a healthy little boy.

Natalie Brazil, 23, came to Featureworld to tell her story in a magazine about her devastating experience of morning sickness and her story appeared on the cover of Closer magazine.

She was delighted when she got pregnant with her much-wanted first baby. But within days she was so sick she was confined to bed. Worried her partner William, 23, a factory worker, got her admitted to hospital. Despite drugs Natalie continued to feel so ill that she was dangerously losing weight. In fact she lost two stones in three weeks and was vomiting blood. Despite efforts to control the nausea with drugs and a drip, in the end Natalie simply couldn’t carry on and decided the only course of action was for her to have an abortion. 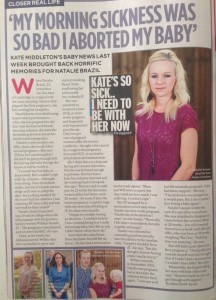 As soon as she had the termination she felt back to normal but at the same time just devastated she’d had to resort to the unthinkable. She felt so upset she underwent counselling.

Everyone told her she was unlikely to suffer the same with a second baby and she couldn’t face life without a baby. However, as soon as she got pregnant again, the waves of nausea hit her and she was just as bad.

This time however she had a lot more help and encouragement from medical staff to continue with the pregnancy. She went into hospital at regular intervals to be put on a drip to give her essential nutrients and stayed in bed. It was a nightmare but she focused on how devastated she felt after terminating her first baby and managed to struggle through. Unfortunately she was still being sick three times a day at eight months pregnant but delivered an adorable and healthy little boy, Alfie.

She is so thankful to Kate Middleton for being honest about her pregnancy sickness as when she terminated her baby, no-one had heard of the condition and it was a taboo subject.

She desperately regrets that she had to terminate her first pregnancy but even now doesn’t feel there was any other alternative at the time.

Natalie says: “I hope telling my story will help any mother going through such severe pregnancy sickness that they are not alone.

“I’m happy with article and pleased there was no hidden surprises, with what was written. Thank you for listening and writing my story.”

When Natalie Brazil, 23, heard the Duchess of Cambridge is once more crippled with the same acute morning sickness that plagued her first pregnancy, she felt nothing but sympathy.

Natalie knows just how debilitating the condition is – when she was pregnant with her first child she had such brutal morning sickness, she made the devastating decision to end her much wanted pregnancy.

Kate Middleton was hospitalised when she was seven weeks pregnant with Prince George in December 2012. This time round, she’s being treated at home in Kensington Palace, but has had to cancel all her public appearances because of her extreme morning sickness, known as Hyperemesis Gravidarum.

Happily Natalie is now mum to son Alfie, three, but he was a result of her second pregnancy.

She says: “If Kate feels anything like I did she will be going through hell. But having had baby George she knows it will be worth it.

“I wanted my first baby so desperately. But I just couldn’t cope with the sickness. I thought I was dying. I lost 2st in three weeks, doctors tried anti-nausea drugs and I was on a drip for days. But nothing worked. By the time I had the abortion I was vomiting 30 times a day and was too weak to dress myself.”

Natalie, from Gloucester, was 19 and at college studying health and social care when she fell pregnant with her partner factory worker William Bassett, 23.

“The pregnancy was planned and we were thrilled,” says Natalie.

But when she was six weeks gone, her sickness started.

“One day I felt fine and the next, I woke up and was terribly sick.”

To start with Natalie thought it was normal morning sickness.

But within days she was so ill that she was unable to move and started vomiting blood. Just swallowing her own saliva made her violently ill.

She was admitted to hospital and diagnosed with Hyperemesis Gravidarum. While over half of all pregnant women suffer some form of morning sickness, only 2 per cent suffer the more serious condition, which is thought to be caused by a huge surge in the pregnancy hormone HCG and can lead to dehydration and malnutrition.

After three days of being on a drip and having anti-nausea injections Natalie was hydrated enough to go home but just four hours later her sickness was back with a vengeance and she was so ill she had to go back to hospital.

She says: “I asked doctors how long it would last. They said it could pass by 12 weeks but that sometimes it was 20 weeks until women felt better and for some it continued throughout the entire pregnancy. I just couldn’t cope with one more day of feeling so ill – let alone nine months.

“It was then I began thinking of an abortion – I couldn’t believe I was contemplating it, I desperately wanted my baby, but I felt so sick I didn’t know what to do.”

And when she came home again but still felt no better, she decided an abortion was her only option.

“My mum and Wills were shocked and upset but they could see how badly I was suffering. I was so sick that I felt if I didn’t get rid of the baby I’d die. I was heart broken but I couldn’t cope.”

Her GP arranged for Natalie to terminate her pregnancy a week later.

“On the day of the abortion I sat on the bed and cried,” recalls Natalie. “I felt physically better immediately, but I was emotionally a wreck. I felt an overwhelming feeling of guilt and emptiness. Telling friends was so hard – they were sympathetic but I didn’t feel anyone really understood how devastating the experience was.”

Natalie was so upset she was referred for counselling – and two months later decided to try again.

“I thought it might not happen again with a second pregnancy,” she says, “And the thought of never having a baby was worse than the sickness.

Within a month, in September 2010, Natalie was pregnant, but at exactly six weeks the sickness hit her hard again.

“I was as ill but I was mentally prepared and I had a lot more support,” she says, “The midwives were brilliant, visiting me most days and encouraging me it would pass.

“And although just moving my head made me want to vomit, being pregnant was still preferable to the aching loss of never having a child.”

Natalie was put under a specialist consultant and admitted to hospital six times between six and 20 weeks of pregnancy – due to dehydration she needed to be put on a drip and given nutrients.

By 20 weeks the sickness lifted slightly though she still vomited three times a day until she had Alfie who was born weighing a healthy 7lb 11 at 39 weeks.

“Holding him was amazing – my nightmare pregnancy was so worth it,” says Natalie.

But she still feels upset about the baby she aborted.

“I console myself that had I not had a termination then I wouldn’t have had Alfie,” she says.

Natalie, who’s now at university studying early childhood, hasn’t ruled out having another child. She says: “I could when Alfie is six or seven. By then he’d be able to understand that I’m so unwell.”

Meanwhile, she hopes telling her story will help anyone in the same situation. “However bad it is – you can get through it with support and become a mum.”

Do you have a pregnancy story to sell? Contact me using the form to the right of this page for advice>>>

Category: Closer stories, Stories sold in 2014, Stories sold to a magazineBy Alison Smith-SquireSeptember 17, 2014
Tags: Pregnancy stories
Share this post
Share with FacebookShare with TwitterShare with PinterestShare with LinkedInShare with WhatsApp