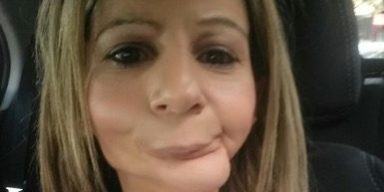 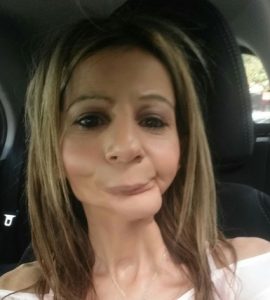 A mother of two has told of her extraordinary battle to survive face cancer.

Says she is just glad to be alive

When Georgina Kokkoris from Sydney, Australia emailed me about her story about how what seemed to be a harmless mouth ulcer turned out to be the start of an extraordinary cancer battle, I was bowled over by her bravery and inspired by how she coped.

Her story appears on the cover of That’s Life Australia magazine and has also been placed with UK news websites Mail Online and Sun Online.

Read her amazing story of survival below…

Story to sell to a magazine or newspaper? Find out how by giving me a few details on the sell my story form >>>

Georgina Kokkoris, 45, from Belmore, Sydney lost her jaw to cancer but here she tells how not only is she grateful to be alive but she still adores taking selfies …

Easing my maternity trousers on, I smoothed my hands over my bump and looked at myself in the mirror. 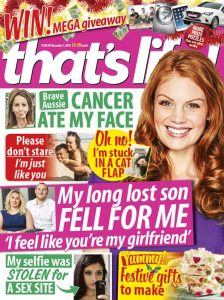 Georgina Kokkoris on the cover!

With a little boy, Bill, aged two and 18 weeks pregnant with my second baby, I felt lucky.

I peered into the mirror again and stuck out my tongue. A couple of weeks ago I’d noticed a strange lump on the side.

My GP said it was just an ulcer but looking at it now, I felt sure it was larger.

My sister Anna, who worked at the local hospital, was concerned. “Why don’t you pop in and see one of the doctors in the head and neck department,” she said.

The next day the ulcer was really sore. Even drinking water made it hurt.

And when I took Anna’s advice and popped in to see the doctor, I could tell he was concerned.

“I think we should check this out immediately,” he said. Within days I’d had a tiny piece of the lump cut out of my tongue.

The results were not good.

“I’m afraid it’s cancer –  squamous cell carcinoma,” said the consultant when I went to discuss treatment, “I’m so sorry but we’re going to have to operate straightaway.”

Instinctively my hands went to my unborn baby. I could feel tears falling. “But what about my pregnancy?”

He shook his head. “I would recommend you have a termination,” he said, “… to save your life.”

I was sobbing. A few days ago I’d been a mum with an ulcer on her tongue – now I was being told not only did I have a cancer that could kill me, but I shouldn’t have a longed for baby.

It was all too much to take in.

But I was already sure about one thing. I couldn’t kill my baby.

So I carried on with the pregnancy. A few days later the lump was removed. It took so much of my tongue away I had skin taken from my wrist to replace it.

Two weeks later at my routine scan I found out I was having a girl. I was thrilled.

But my joy was tinged with worry.

At the next consultation the doctor said: “We think we removed all the cancer but to be sure you need radiotherapy.”

As I laid on the radiotherapy table, I had to wear a huge metal shield over my tummy to protect my unborn baby.

Afterwards my mouth was sorer than ever.

As I got thinner doctors began worrying about the baby.

Six weeks before my due date the doctor took one look at my emaciated frame and said, “pack your bags as that baby is coming out tomorrow.”

Dina was born by C Section. Weighing a healthy 1.5 kilos, I cried with relief when I saw her button nose, tiny fingers and rosebud lips.  My face was so swollen and I was in such pain. Yet when I held her in my arms for the first time, I almost forgot about my cancer.

And despite all my worries over how the treatment affected her, she was perfect.

Months passed. I underwent further tests to see if the cancer had spread.

I got to the one year milestone.

“I am delighted to inform you we’ve got the all –clear,” said my consultant.

Four years later in 2011 he declared me in remission. It would probably not come back, he said, and I could go and enjoy a normal life.

A month later and my husband and I divorced – we’d never seen eye-to-eye. The stress of it all made me lose my appetite.

I decided one reason I’d gone off food was my teeth – during the treatment I’d lost quite a few.

My dentist thought I would be a good candidate for dentures. “I’m just going to take a scan of your mouth,” she said.

I simply was not prepared for what she said next.

“There is a tumour,” she said pointing to a blurry area on the scan, “in the bone of the jaw.”

I had part of it removed and looked at under a microscope.

Surely cancer couldn’t strike twice… only it had.

Soon I found myself back in the oncologist’s office. “Unfortunately it is a particularly aggressive form of squamous cell carcinoma cancer,” he said.

And no, he didn’t think it had spread from my tongue. “This is a completely new primary tumour,” he explained.

The diagnosis was devastating. I’d gone through so much, I thought I’d beaten cancer – facing it again was a terrible thought.

Death flashed before me.

The surgeon explained a drastic operation could save my life.

But it would come as a price – my face would be permanently disfigured – altered. And worst of all I’d never be able to eat normally again. I adored my food – how could life be so cruel?

Within three days I’d undergone the first surgery to remove not only the cancer but the whole of my jaw bone.

To replace it the surgeon had cut out a bone from my left leg.

Only just as I thought I was making a recovery, my new jaw bone snapped. It meant I had to have a metal plate inserted. Only that broke too – which meant further surgery.

Over the next 12 months I had 13 operations to try to rebuild my jaw.

For months I couldn’t speak. And while I tried to defy the doctor’s predictions that I’d never eat by ordering my favourite take away, when I tried I couldn’t swallow. So I was tube fed.

Too sick to care for my kids, they’d gone to live with their dad.

Now when they visited they were shocked by my face.

The first time they saw my face Bill burst into tears, stunned by my looks.

Meanwhile Dina sobbed, ‘That’s not my mummy! It’s a monster.”

It was the hardest time. But eventually I came home and slowly recovered.

I went back to work as a quality control operator. My jaw healed as best it could and I learned to enjoy pureed food. I learned to talk again and began to rebuild my life.

Yet one thing was still missing in my life.

One day chatting with a work colleague I confided: “I’d love to meet someone. But I don’t think any man would ever fancy me like this.”

It was then she said she knew a guy who was single and maybe she should introduce us.

She showed me a photo of Thomas, 45, a civil servant and immediately I thought he was gorgeous.  I insisted she showed him a photo of me.

But she said: “He’s seen one already and he wants to be put in touch.”

Reluctantly I agreed, determined once we met Thomas would take one look at my face and run a mile.

As soon as we met for a drink we hit it off – in fact we hardly stopped talking. And when he asked to see me again we went on from there.

That was three years ago and Thomas recently moved in. My kids, now aged 13 and 16, still live with their dad but I speak with them every week and they regularly visit. They’ve accepted my new looks and now I’m just mum to them.

When I go out people always stare. But I’m used to that and my changed looks.

I still love make up, dressing up for a night out and keeping fit in the gym. I adore taking selfies.  Before I got cancer I used to love taking a selfie – and I still do as many as before.

Sadly the treatment for cancer left me with no tastebuds. And I can’t eat unless food is liquidised or pureed – but I manage to eat cheesecake, coffee and mousse when I go out to a restaurant.

But I don’t feel down about my lot. Despite everything I’ve been through I am looking forward to the future. Thomas and I eventually plan to marry.

Meanwhile I have two sisters and the most supportive family. Most of all I’m still alive. I wake up in the morning feeling grateful to have survived such an ordeal. I am so incredibly lucky to be here.”

Category: Stories sold in 2016, Stories sold to a magazineBy Alison Smith-SquireNovember 25, 2016
Tags: Health stories
Share this post
Share with FacebookShare with TwitterShare with PinterestShare with LinkedInShare with WhatsApp