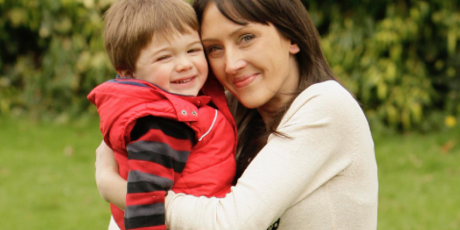 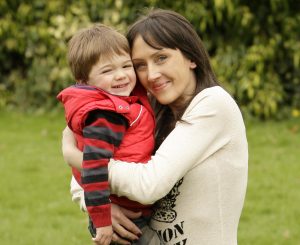 Claire is bringing up her late sister’s son …

Morgan, six, was orphaned when both his parents suddenly died in a freak accident.

He was taken in by his grandmother. But tragically she then died.

Claire and her partner Ian, who he called dad, took him in. Then Ian also passed away

Adds Morgan is the happiest little boy because although he has experienced such tragedy at a young age, he always knew he was loved 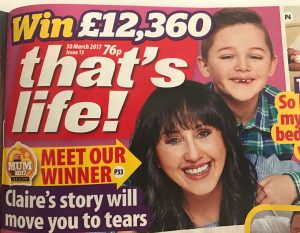 Claire and Morgan on the cover!

Claire Sessarego first came to Featureworld in 2009.  She believed her father Philip Sessarago, a mercenary, was blown up in a Bosnian bomb and she grieved for seven years. That was until one day when she saw him alive and well on TV – it was then the awful truth unfolded. Her father had faked his own death and set up a whole new life for himself.

After her father really died, I wrote Claire’s story about how what he did affected her but how she still loved him, for the Daily Mail where it appeared over two pages and went into a magazine.

Afterwards Claire and I stayed in touch but I don’t think either of us thought she would need Featureworld’s press and media services again.

How wrong we both were.

In 2011 Claire, 37, lost her sister, Terri-Ann, in a devastating freak accident.

Terri-Ann and her partner Tom were both killed when a lorry load fell on them made national newspaper headlines. Tragically their only son Morgan, then at nursery, was instantly orphaned. 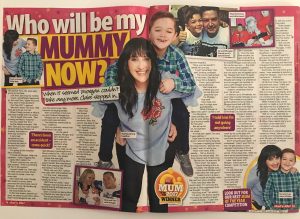 It appeared over three pages!

The shocking story made the front pages.

Once again I helped the family with the massive media attention their story attracted and placed emotional interviews with Claire and her mother Diane, who was left to care for her grandson, in The Sun newspaper and various magazines.

As Claire, Diane and the rest family managed to pick up the pieces of their lives again, they even appeared on ITV This Morning. And that was where the story should have ended.

But two years later Diane got some terrible news – she had breast cancer and it had spread.

She became too ill to care for Morgan and went to a hospice and guardianship went to daughter Claire and her partner Ian. 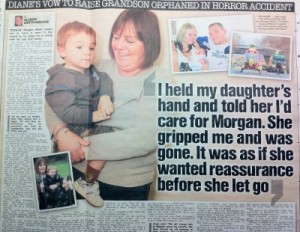 Featureworld story for the family in The Sun

Ian was Claire’s rock.  The couple had been together since she was just 15 and throughout all of years of sadness Claire had been put through Ian was always there quietly in the background, but steadfastly supporting Claire.

Not only was he a huge support for Claire but Morgan also turned to Ian, even calling him dad.

Yet devastatingly as Diane was dying from cancer, there was another bombshell in store for Claire when Ian was then diagnosed with lung cancer.

The agony Claire and the rest of the family went through is unimaginable. Claire does not have children of her own – any hope of that went when Ian died – but she does have Morgan. The pair of them have been through so much tragedy but it has made their bond even stronger. Morgan has turned into a delightful boy, which might surprise many given the tragedy he has been through – but Claire says he is simply a product of so much family love.

Poignantly, Claire was very close to Terri-Ann and she knows that her sister would be so proud of Morgan who is doing so well at school and has turned out to be a son to be proud of.

I must admit knowing what Claire has been through I had tears in my eyes when I saw Claire and Morgan photographed on the front cover of That’s Life magazine – where she has won their Mum of the Year! 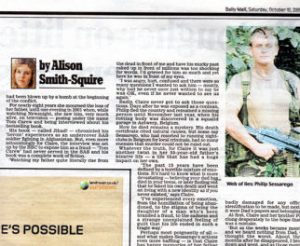 The first story I did for Claire…

For months That’s Life has been searching for their Mum of the Year 2017. They say: ‘Claire has endured so much, but has stayed strong for a special boy…’

I am absolutely thrilled for Claire and full of admiration for her and adorable Morgan. Well deserved and well done!

Do you have a story for a magazine or a newspaper? Contact me for a personal, confidential and bespoke service by using the quick enquiry form >>>

Category: Stories sold in 2017, Stories sold to a magazine, That's Life storiesBy Alison Smith-SquireMarch 23, 2017
Share this post
Share with FacebookShare with TwitterShare with PinterestShare with LinkedInShare with WhatsApp