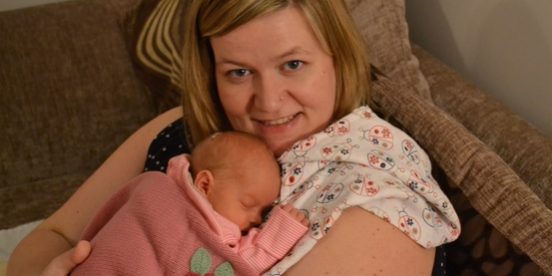 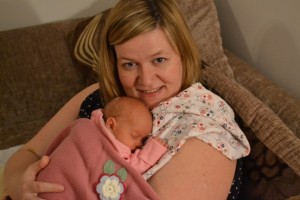 Having captured everyone’s hearts when she appeared in the Daily Mail newspaper, little Eliza Bellamy has now been featured on the cover and over two pages of Take a Break magazine!

Mum Ellen Bellamy came to Featureworld to tell her extraordinary story of how doctors told her baby Eliza had died in the uterus.

Ellen was 35 weeks pregnant and had begun bleeding when she’d gone to hospital to be checked out.

It was then two doctors gave Ellen the devastating news Eliza showed no signs of life on scans and would be stillborn.

The family were devastated and began the terrible task of telling family and sorting funeral arrangements. 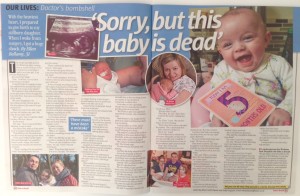 Ellen in Take a Break!

However, four hours later during a c-section under general anaesthetic  – when doctors expected to deliver a dead baby – Eliza was born very much alive! Because doctors were not expecting her to be born alive, there was no waiting baby cot and no paediatricians ready in the theatre.

Instead Ellen’s terrified husband Chris saw an army of medics rushing into the theatre. Naturally he thought at that moment his wife was in trouble as well – even that she might have died.

It later transpired as it was a weekend inexperienced doctors were carrying out the ultrasound scan rather than a sonographer and had mistakenly scanned Eliza’s tummy rather than her heart.

The hospital has since apologised for the level of care that they agree fell far below anything the Bellamy family could have expected.

However the happy ending is that Eliza was absolutely fine and is the most gorgeous little girl with a beaming smile that melts everyone.

Would you like to tell your story to a newspaper such as the Daily Mail, a mag like Take a Break and a show like ITV This Morning? Find out more by contacting me using the ‘sell my story‘ form to the right of this page>>>