Surprise baby story! Sasha Hood’s story about how she had a baby and never even realised she was pregnant appears in BELLA magazine, MAIL ONLINE and SUN ONLINE … 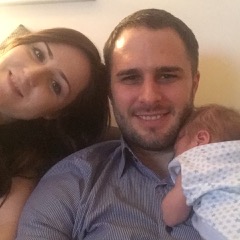 Sasha and Marc with baby Theo!

Until Sasha Hood 24, gave birth to her own amazing surprise baby, she used to think not knowing you were pregnant couldn’t be possible.

But four days after celebrating her grandfather’s 89th birthday where she appeared slim and trim in photos, Sasha was celebrating another momentous family event – the birth of a baby boy.

Yet she didn’t even know she was pregnant.

In fact her baby son – who weighed a healthy 7Ib 6oz – was delivered by her shocked boyfriend, Marc, 29, a DJ.

The couple had no idea they were about to become parents until Sasha began getting tummy pains.

She went to see her GP who in a state of shock directed straight to the maternity unit. Incredibly a midwife then told her not only was she pregnant but around five days overdue. 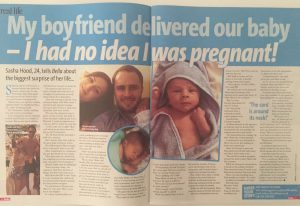 The family in Bella mag!

As the midwife thought she was in the early stages of labour the stunned couple were sent home.

But shortly after Sasha’s pains increased – there was no chance of her getting back to hospital in time. Marc dialled 999 but realised he would have to deliver the baby himself – which he proudly did while on the phone to paramedics in their bedroom.

Sasha was shocked – only a few weeks earlier she was horse riding. The last few weeks she had put on some weight but thought it was due to Christmas and eating out more. She was also on the pill and cannot remember not taking it. She has always had irregular periods and the irregular periods hadn’t stopped.

Family and friends rushed out to buy baby clothes. Needless to say they were all absolutely stunned when the couple announced their surprise baby’s arrival on Facebook. Despite the shock the couple are thrilled with their son, Theo, and are incredibly happy to have him.

Sasha and Marc’s amazing story appeared over two pages of Bella magazine. After the magazine, the couple decided they would like some further publicity and I arranged for their story to appear on Mail Online and Sun Online.

Marc said: ‘Thank you so much for your work and fingers crossed there will be more to come!’

Selling a story? Do you have a surprise baby story to sell to a magazine? Contact me for more information!

Category: Sell my story to Bella magazine., Stories sold in 2016, Stories sold to a magazineBy Alison Smith-SquireMay 18, 2016
Tags: Baby storiesPregnancy stories
Share this post
Share with FacebookShare with TwitterShare with PinterestShare with LinkedInShare with WhatsApp