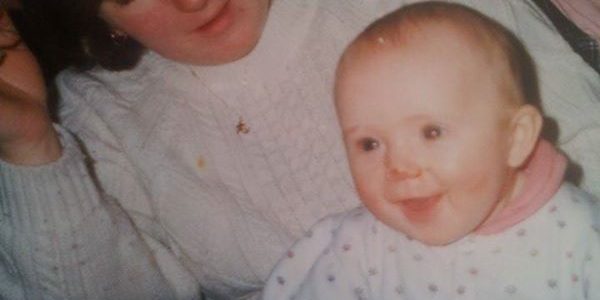 Terrified by my own child… Take a Break magazine

Why was daughter Jodie so out of control? 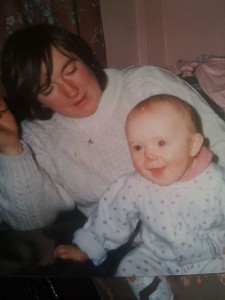 Mandy with her daughter as a baby…

Jay came to me to with his transgender story.

As a child Jay was Jodie and she was the talk of the small town where she lived with her mum Mandy, 45. Out of control – she was always in trouble with the Police for petty behaviours, she even tried drugs. In the end life got so bad with Jodie that her mum was forced into a heartbreaking decision to put her daughter into care.

Throughout this time Jodie was in turmoil – devastated by her own behaviour she just didn’t understand why she was so angry. However, a two years ago she underwent counselling for anger issues. And it was there, she realised the reason was that she was a man trapped in a woman’s body. It explained all the frustration she felt growing up and why she lashed out.

Jodie has now been referred to a gender clinic, now lives as a man called Jay and is about to undergo gender reassignment to make the final transition from a woman to a man.

Mandy says she wasn’t shocked when Jay told her of his gender swap decision – just relieved.

Do you have a real-life story to sell to Take a Break magazine? Get in touch if you would like free confidential advice about selling a story to Take a Break, another magazine, selling your story to a newspaper or appearing on TV.

Read the Mandy and Jay’s Take a Break story below…

Terrorised by my daughter – when her daughter Jodie threatened her with a knife, Mandy Proffitt knew she had urgent action…

Cradling my baby daughter Jodie in my arms, I said to her, ‘my you’re a pretty little thing.’

Her dad Paul longed for a boy. He worked as a joiner and wanted a son to follow him in his footsteps.

But secretly I was delighted to have a second baby daughter. My first Kelly-Louise was two and I thought it would be lovely to have two sisters together.

She could wear her older sister’s dresses and they’d play dolls together.

Only by the time she was three, the only dolls she wanted were action men. And when she was four she asked for a power drill for Christmas.

Aged five she didn’t want to wear a skirt to school.

Luckily she could wear trousers. “She’s a real tomboy,” I explained to a friend at the school gate as Jodie sauntered out with the boys.

Over the next few years Jodie was more like a little boy than a little girl. She adored going to work with her dad. She wasn’t interested in her sister’s toys or choosing a party outfit.

I didn’t mind. By now I’d had three more children – Devon, Jack and Jordan. Life was hectic enough. As long as she was happy, then I was too.

When she was nine Paul and I wed.

I said to Jodie, “I’d love you to be a bridesmaid at the wedding.” I’d already seen a beautiful white dress with a lovely waistband for her and Kelly-Louise. 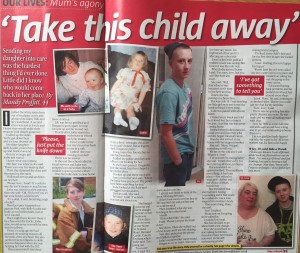 Mandy’s story in Take a Break.

But her face turned to thunder. “I’m not going to wear a dress!’  She slammed the door and stomped off.

At teatime I tried again. “But it’s our wedding …” I replied, “it’s only for a few hours.”

Then I added, “And you can wear boxer shorts underneath.”

By the age of 11, she’d cut her hair short. People regularly mistook her for a boy but she didn’t care.

Sadly Paul and I had split. So when she began missing school, I thought it was down to that.

Only the truancy got worse.

One day Jodie didn’t come home from school at all. Desperate I rang all her friends, everyone I knew.

In the end I called the Police.

“What was your daughter last wearing?” asked the officer. I found myself describing a boy.

Three days went by. I was frantic with worry, expecting the worse. Jodie thought she was tough – one of the lads – but she was shorter and slimmer than average.

Three days later just as I’d given up all hope of ever seeing her alive again, she simply turned up.

“Half the estate’s been out looking for you,” I said, tears streaming down my face. “Where have you been?”

But she just shrugged her shoulders. “Around,” she said.

Despite telling her never to go missing again, a few months later the same thing happened.  This time she went missing for five days.

Meanwhile, it felt as if I were constantly at her school.

“We’re worried about Jodie,” said the head, “she’s not concentrating on her studies.”

The Police visited again. Jodie had been found with cannabis on her. It was just a caution this time but if it happened again…

Social services were called in.  I went for meetings with them and Jodie.

But when we asked her what was wrong, she’d just shrug her shoulders and stare out of a window. “I dunno…”.

“You’re not going out,” I said one evening when she went for the front door, “It’s late and it’s dark.” I stood in the way barring her route.

It was then she picked up a knife.

My heart was thumping.  I was terrified.

Slowly she put the knife down and walked out the door.

But I was shaking. It seemed unbelievable but I was frightened for my own life.

The next day I woke up crying. I just couldn’t carry on any more like this.

The constant visits from the Police, phone calls from the school. The rows – and all in front of my other kids.

I picked up the phone and rang social services. “I can’t go on,” I said.

A social worker arrived quickly. I broke down as I explained what happened.

Guilt surged through me. What was I doing giving my daughter up? At the same time I knew it was the right decision.

While the social worker stood by, I told Jodie.

“Well, that’s fine by me because I don’t want to live here anyhow,” she replied.

Within ten days Social Services had found a foster family for her to live with.

As I helped her pack her stuff, it felt awful.  Yet I knew there was no other way.

She was so angry – and I didn’t understand why.

The next few months were terrible.  Although I visited once a week, it was so hard to not seeing her.

And while Jodie was fine at first Jodie, soon she was begging to come home.

Only I couldn’t risk it. She was still having problems at school, still staying out all hours, drinking and smoking.

I simply couldn’t put myself through it again.

Years passed. She settled with a foster family.

Aged 17 social services found her a flat. She began volunteering for charity work.

Suddenly I noticed she was calmer and less angry.

Then when she was 19 she told me she had something to tell me.

“The place where I’ve been volunteering, there was a woman,” she began, “she’d been giving me some counselling. She thinks I am transgender.”

“She thinks the reason I’ve had all these problems is because I’m a man trapped in a woman’s body.”

I sat there open-mouthed in shock. What was she trying to say? “And what do you think?” I said at last.

It all tumbled out. How she never felt she fitted in at school, not with boys or girls. How she hated it when she began to develop a woman’s body.

Yes it was a shock. But at the same time it made sense. For years she’d never been able to explain how she felt.

“I’m going to start living as a man,” she said, “and first of all I’m changing my name. From now on I want to be Jay.”

I thought I would feel more upset to lose a daughter. But I saw it as gaining a son. Jay explained he hoped to begin taking hormones first. Then he’d have his breasts removed and finally he’d have a gender reassignment operation.

‘The doctors’s already referred me to a clinic to get things started.”

I looked at Jay’s face – for the first time he looked happy.

A year on and Jay now lives full time as a man. I still don’t know if Jay can ever forgive me for putting him into care. And we still have some making up to do. But at last Jay is finally happy and that’s the main thing.”

Jay Proffitt says: “Even as a young child I knew something was wrong with me. And when I hit puberty I was so unhappy I went off the rails.  I fancied women and yet I knew I wasn’t a lesbian. I didn’t know what was the matter with me and took my frustrations out on mum.

I’ve now met a girlfriend and am looking forward to having a full sex change. Now I know why I was so unhappy I don’t feel angry anymore.”