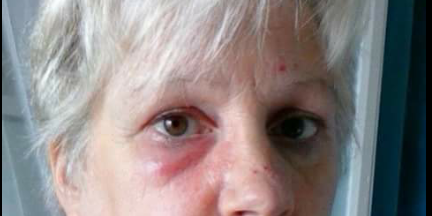 Dental story: Melanie Maddocks’ story about how her dentist was struck off appears in REAL PEOPLE mag… 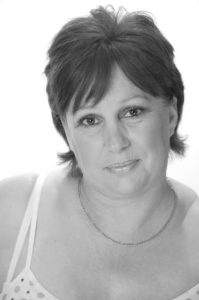 Melanie was too upset to smile…

Melanie Maddocks, 55, had won over £40,000 compensation after her dentist botched her teeth. So where was her money…?

When Melanie won £48,000 damages after an NHS dentist ruined her teeth, she felt justice had been served.

The divorced mum of three was left in agony, almost lost her eyesight after her dentist botched up a bridge and failed to notice some of her teeth were rotting.

Following the nightmare, she discovered other patients had also suffered at the hands of dentist John Allen. He was struck off and and can no longer practice.

However, seven years on she is still waiting for him to pay her compensation.

Melanie, who now wears false teeth, said: “My life has been ruined by this dentist. It seems wrong that a dentist can be accredited by the British Dental Association and be struck off – and yet a patient can still be left high and dry.”

The mother won her case in 2011 and has since taken him to court again for non payment. Interest payments added an extra £20,000 to the debt. However when bailiffs went round to his bungalow, they discovered he owned nothing. Everything – including his car – was in his wife’s name. It meant they couldn’t take anything away as payment for Melanie.

Melanie’s story appeared over two pages and on the front page of Real People magazine. You can read it below…

Dental story to sell? Are you seeking compensation? Contact me for more advice about getting publicity for your story >>> 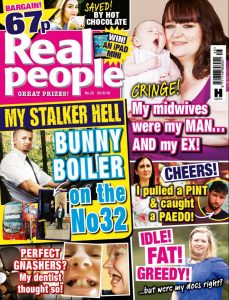 Melanie made the front page…

“Hauling myself out of the chair I smiled at my dentist John Allan. Another routine check-up over and once again no fillings.

In fact, apart from some bridge work when I first joined his NHS surgery three years ago, I’d never needed anything else done.  I could only put it down to brushing my teeth regularly every day and of course never missing a check-up.

“See you in six months,” I said as I left his dental surgery.

A few months passed. But in February 2008 I began suffering from toothache.

Mr Allan said: “It must be removed.”

Only when he came to extract it, the tooth wouldn’t budge.

As I lay shocked in the dentist’s chair – my tooth half in and half out – he said: “I’m so sorry but I think you will need to have it removed in hospital.”

Mr Allan scribbled some notes. “I should be able to get you in within a fortnight,” he said.

Back home in agony – my face puffed out like a hamster’s – I gulped back painkillers.

Meanwhile every day I checked my post for the hospital appointment. It didn’t arrive.

I rang Mr Allan. “I’m in agony,” I said. Eating and drinking had become a nightmare.  And I was spending a fortune on painkillers.

“It should be any day now,” he said reassuringly.

But months went by. It was six months before I got an appointment. 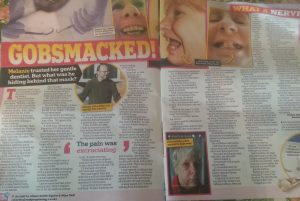 But he looked concerned.  “I’m worried about your other teeth,” he said, “they are in a very poor condition. Have you been seeing your dentist regularly?”

According to the consultant I needed two more teeth extracted.

And the bridges Mr Allan did were so poorly done they needed to be replaced.

How could my teeth have gone from being so good to being rotten?

I couldn’t afford to have the bridges redone.

Yet a few months later one fell out. And then I got a terrible toothache in the other.

I went back to the hospital.

An infection had set in underneath the remaining bridge.

The next few weeks were hell as antibiotics failed to touch it. I ended up in hospital on a drip. The infection was so bad it travelled to my eye.

A doctor said: “Mrs Maddocks you are lucky you haven’t lost your sight.”

I was furious. Not only had two more teeth been removed but the remaining bridge had to come out as well.

Looking in the mirror at the gaps either side of my mouth I wept.  To think all this time I thought my teeth were fine, they were actually rotting.

Another dentist fitted false teeth.  But I hated eating and drinking with them. They made me feel depressed.

Furious I decided to complain to about Mr Allan to the authorities.

I was shocked when the General Dental Council told me I wasn’t the only patient who’d complained about his poor care.

Thankfully in 2010 he was found unfit to practice and was struck off.

But while I was pleased he wouldn’t ruin anyone else’s teeth, it didn’t help me.

I was left with no teeth and no money to pay for more. My three adult daughters said: “Mum you should have got compensation for the misery that dentist put you through.”

So in 2011 I looked online and found a solicitor to sue him for compensation. When they a firm of lawyers said they could take it on as a no win no fee case I was thrilled.

Finally I’d get some money to have some new bridges put in. At last I could throw away the dentures.

In November 2011 my solicitors took my case to Chester County Court. Mr Allan didn’t even turn up but a judge agreed I should have compensation.

I was thrilled to be awarded £47,333. As well as getting my teeth sorted – I could treat myself to a well-deserved holiday. I began looking at brochures.

Meanwhile, every day I went to get the post at my home in Barnstaple, Devon, to see if a cheque arrived.

Weeks turned into months and there was no money.

Over the next two years my solicitor sent letters and rang him – but Mr Allan never responded.

In December 2015 we finally went to court again. My solicitor got a writ for non payment – with costs and interest added the total now due was £63,000.

So I paid hundreds for bailiffs to visit Mr Allan at his home.

“If we can’t get the money we can take goods such as a car he owns,” the bailiff said.

I was shocked when I got a phone call from them.

Yes, they’d seen Mr Allan – he was pottering about doing the garden at his bungalow when they called. “But,” said the bailiff, “he wouldn’t let us into the house. He then said the house and even the car in the drive belonged to his wife. As none of it – even the furniture – belonged to him we couldn’t legally take it.”

I was stunned. I didn’t necessarily want the bailiffs to take Mr Allan’s possessions away but at the very least I thought he’d make some effort to pay.

It seemed so unfair.  With the writ due to expire in ten months I sent in the bailiffs again – but once again they came away with nothing.

Mr Allan told them if he gets a job he will offer me a payment plan.

However six months on I am yet to see a penny. It seems wrong. He has caused me a lifetime of problems with my teeth. And yet he can carry on as if nothing has happened.”

Mr Allan says when he is in a position to do so, he will try to offer a payment plan to Melanie for settlement of the matter.

Category: sell my story to Real People, Stories sold in 2016, Stories sold to a magazineBy Alison Smith-SquireJuly 15, 2016
Tags: Conned and scammed - real-life storiesHealth stories
Share this post
Share with FacebookShare with TwitterShare with PinterestShare with LinkedInShare with WhatsApp