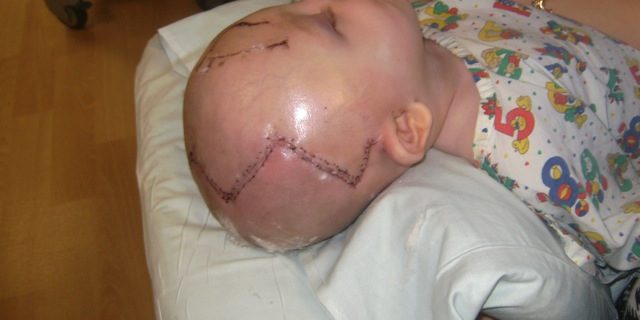 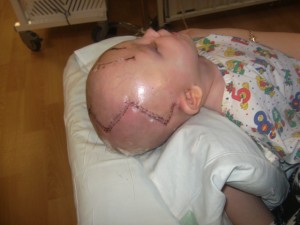 Samantha’s son was born with a million to one problem – little Kaiden Barnes had a fused skull. It meant as his brain grew, his skull wouldn’t grow with it and his brain would be squashed.

Incredibly it was Samantha herself who first noticed Kaiden had a problem. When he was born she worried his head was an unusual cone shape. But her midwife said it was just where he’d been squashed during birth and as a first-time mum, Samantha believed she must be wrong.

A few weeks later, Samantha was still concerned Kaiden’s head wasn’t round as other baby’s heads were, so she asked her health visitor. She told Samantha the shape it was due to how he was lying in his cot.

It was only when Samantha took Kaiden for a check-up for a cough that the doctor mentioned it. It was then she felt sick, realising she’d been right all along to be concerned.

After scans Kaiden was diagnosed with craniosynostosis – a condition where the skull plates fuse too early. He had one of the rarest forms – a unilateral lambdoid synostosis. It causes flatness of the head and stops the brain from growing. Ultimately if not operated on Kaiden would have died. 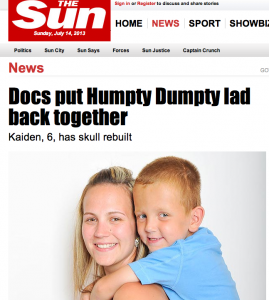 Kaiden with mum Samantha in The Sun

But the operation to correct it – literally cracking open Kaiden’s skull and piecing it back together again with joints so it would expand with his growing brain – could have killed Kaiden itself.

So Samantha and her partner Damon faced terrible anguish, knowing their son could die during the nine-hour op. Luckily Kaiden was fine – doctors literally cracked his skull open and then put it back together again, giving his brain room to grow.

Kaiden was one when he underwent the op. The fact his brain hadn’t been able to grow properly had begun to hinder his development. Luckily a few weeks after the op Kaiden crawled. At 18 months old, he walked.

Kaiden is now aged six and although doctors said he could be brain damaged as a result of the op, he is a healthy little boy who is full of mischief. As he grows he is likely to need more surgery.  But he is under the care of his excellent doctors at Alder Hey Hospital and he should live a completely normal life.

Samantha tells Kaiden scars on his skull are there because he was like Humpty Dumpty – he had a problem with his skull but doctors were able to put him back together again.

Samantha says: “I wanted to raise awareness of this condition. I wanted to do a story so that other parents could read it and take heart that their child can be ‘cured’  and will be ok.”

Do you have a medical miracle story to sell? Have you undergone an amazing operation? Or perhaps your child has undergone an incredible treatment that’s saved their life? Why not tell the world about it – and earn a fee? Contact Featureworld with details using the form to the right of this page>>>