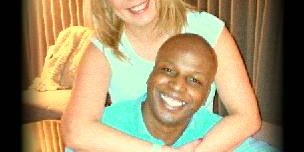 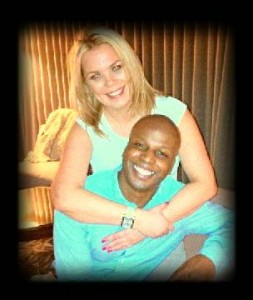 Katie Morris’s story about how partner Duane Walters has a womb, appears in Reveal magazine…

After Duane Walter’s story appeared in The Sun and on Mail Online, his partner Katie told her side to Reveal magazine.

Katie was very worried when partner Duane told her he had blood in his urine. She was even more concerned when doctors decided to carry out tests for cancer.

But neither of them could have imagined what was wrong with Duane.

Luckily tests for cancer came out clear but then Duane was told the shocking news he is a man with a womb.

It appears the blood in his urine is periods and he is about to undergo surgery to have a hysterectomy.

You can read Katie’s extraordinary story, which appeared over two pages of Reveal magazine, below…

Real Life story for Reveal magazine? Contact me using the form to the right of this page and I can let you know if your story might be suitable for publication in Reveal…

I discovered my man has a womb…

When Duane Walters began suffering from regular bleeding when he went to the loo, he and his partner Katie Morris were terrified he had cancer.

But incredibly tests revealed Duane, 37, has a fully functioning womb inside him. 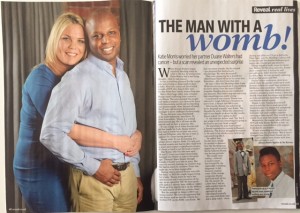 Katie and Duane in Reveal

The couple, from Wigan, Lancashire, were stunned when doctors told them it appeared he was having periods. And now the business development manager is set to undergo a hysterectomy.

“The news was a bombshell,” said Katie, 35. “Duane is a normal heterosexual guy. He is all man on the outside and we have a great sexlife.

“So it was a huge shock when doctors told us inside Duane doesn’t only have a uterus, cervix and fallopian tubes but might even have ovaries. And in fact it appears he’s been having periods.”

And Duane said: “It was devastating. I’ve always been a regular bloke. I’ve only ever fancied women and had no idea I had both a man’s and woman’s reproductive system.”

Katie, a chef, who already has two children from a previous relationship, and Duane first met five years ago at a party and immediately hit it off.

And two years ago they began trying for a baby of their own.

Katie said: “As I have had two babies, when we didn’t conceive I realised it was unlikely to be a problem with me.”

Duane’s sperm analysis showed a normal amount of sperm but fertility doctors explained many of them weren’t healthy enough to fertilise an egg naturally. So in January 2014 he and Katie embarked on IVF, using a treatment called ICSI where doctors pick out a healthy sperm and inject it directly into an egg in a test tube. If the egg then develops into a healthy embryo it is then transferred into the woman’s uterus in the hope it will grow into a pregnancy.

She said: ‘We went through three attempts. On the second go I got pregnant but devastatingly I had an early miscarriage. We were both so upset as we long to have a baby together.’

The couple were gearing up for a fourth attempt when in November 2014 Duane again began experiencing bleeding in his urine.

He says: “I’d had the bleeding before when I was 18 and had it checked out. But doctors reassured me it was nothing to worry about. However, it was the third lot of bleeding I’d had in a year and I was really worried.”

Concerned, he visited his GP who referred him to Leigh Infirmary Hospital for tests. A biopsy came back clear but as Duane was still experiencing regular bleeding, he was sent for an MRI scan.

And nothing could have prepared the pair for what came next.

Says Katie: “Duane and I went to see the consultant and were really worried. So when he said to Duane he should sit down as he had something to tell us, Duane asked ‘am I going to die’.

“It was then he said, ‘No, but I am going to tell you something it’s going to be hard to get your head around.’

“He then went on to explain the scan had located a fully functioning uterus, fallopian tubes, ovaries inside Duane’ tummy. He even had a cervix.  Even the doctor struggled to fully explain it. He said he was an experienced doctor but in his whole career he’d never seen anything like it.

“And further tests would be needed to discover how the bleeding was appearing in his urine but he believed Duane was having periods.”

The devastated couple were relieved it wasn’t cancer. Adds Katie: “We were stunned. But it also made sense. Before the bleeding episodes Duane often complained of back ache and was sometimes moody. Now I look back and see he was suffering from period pains and PMT.”

The diagnosis, while completely unexpected, did also explain strange symptoms Duane had lived with for all his life.

Recalls Duane: “As a little boy I’d suffered from an undescended testicle. Although that was operated on and put right – and I developed normally as a man with body hair and a deep voice – often during and after sex I’d get a dull ache. And then there were the episodes of bleeding.

“I always felt it wasn’t right but despite undergoing so many tests doctors could never find anything wrong.”

Duane is now set to have more tests to check his gender and he will undergo a hysterectomy. It’s hoped tests will give a proper diagnosis – although it’s believed he could have Persistent Mullerian Duct Syndrome. This is a very rare condition where the Mullerian Duct – which is present in every foetus – does not shrink when male hormones are produced. This means the Mullerian duct will develop into female sexual organs.

However he says, “I’ve always felt completely happy as a guy. I don’t feel I have any feminine side and wouldn’t consider carrying a baby myself. That would be too weird and I just want this womb removed.”

Meanwhile, the couple, who still hope treatment will help Duane realise his dream of becoming a dad, say they have been overwhelmed with support.

Duane said: ‘Telling my mum was the worst thing. She just cried. It is so hard to understand.”

But Katie says: It hasn’t changed how I feel about Duane. If anything we’re even closer. He’s just Duane – a loving, caring individual – a man who is my soulmate. He is a wonderful stepdad is still the same person to me. And whatever the future brings, we are going to face it together.”

Category: Stories sold in 2015, Stories sold to a magazineBy Alison Smith-SquireApril 7, 2015
Tags: Health storiesreveal magazineShocking real-life
Share this post
Share with FacebookShare with TwitterShare with PinterestShare with LinkedInShare with WhatsApp