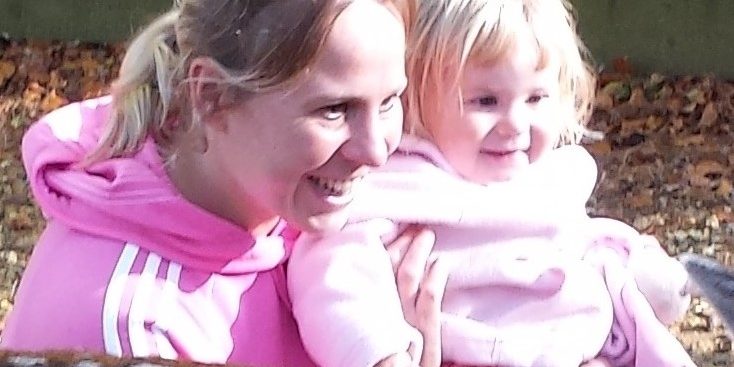 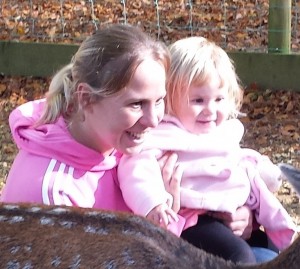 And stories don’t come much more emotional than the Noyce’s miracle baby story – mum Allison Noyce had baby Sophie 15 years after she went through the menopause. And incredibly she only found out she was even pregnant 12 days before Sophie was born.

Allison had hardly any periods during her teens and by the age of 20 they’d stopped completely. She went to see a doctor and tests confirmed the worst possible news – whereas the average age for the change is 51, Allison had had an extremely early menopause.

Shortly after she met Richard and they wed. Aged 30 she went back to see the doctor as they both hoped something could be done. But doctors could only confirm the earlier diagnosis – Allison had gone through the change of life.

Both of them were very upset. But Richard was supportive and pragmatic and said OK, well they’d make a live without children. He even wrote a bucket list of things they could enjoy together.

Enjoy life they did – they both adore long bike rides, hiking and also went on some fabulous holidays.

But then one day Allison suddenly felt a lump in her stomach. She had been feeling off colour and worried sick it was something extremely serious such as cancer, immediately went to see her GP. 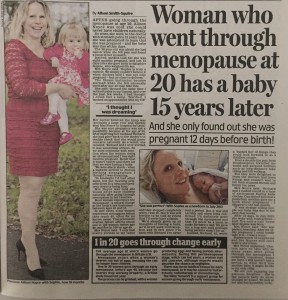 Allison in the Daily Mail!

Her GP referred her to hospital where incredibly the lump turned out to be baby Sophie. More shocks were in store – Allison was estimated to be around eight months pregnant and in fact just 12 days later after a very straightforward natural delivery baby Sophie was born.

She is now aged 16 months and Allison tells me she and Richard would love a sibling except she still hasn’t had a period. In fact she has not had a period since her teens. So the odds of another baby happening are likely to be low – but the couple feel blessed anyway with their adorable Sophie.

I have placed Allison and Richard’s story before – it has appeared in Best magazine and also in Real People magazine – but it is wonderful to see it in the Daily Mail.

We all hope it gives hope to anyone who has gone through an early menopause that pregnancy can still happen!

If you have a super emotional story suitable for publication in the Daily Mail, another newspaper or you would like to sell a story to a magazine, do get in touch!