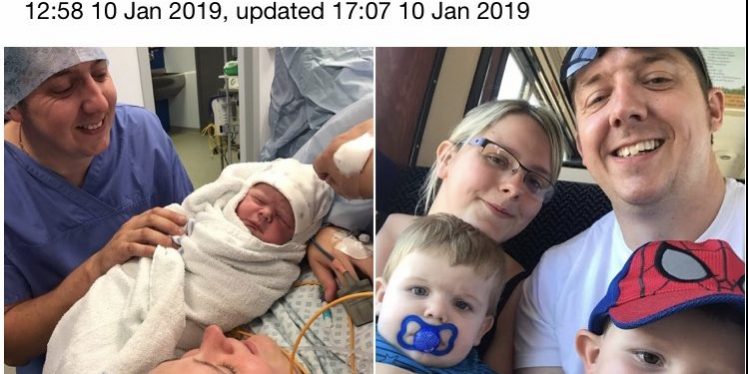 Many interviewees selling their story choose Featureworld because they want their story to be published in more than one publication.

But she wanted to get her story to an even bigger audience.

Story to sell to the media? Contact me for independent and free advice about selling your story to multiple outlets >>>

How selling a story works 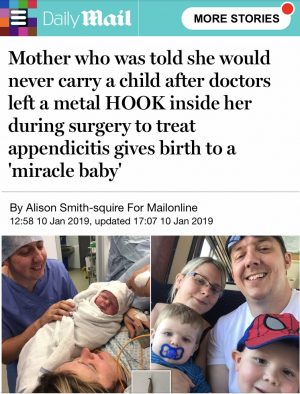 Little Charlie, one, was born after his mum underwent surgery to remove a metal hook left inside her by bungling surgeons during a previous appendix op.The damage made by the instrument left Miss Elliott, a 26-year-old administrator with such scarred insides doctors said she might not be able to carry a baby full term.

Cuddling her son, Miss Elliott, 26, an administrator, who lives with partner Craig Halliday, 33, a driver, and their eldest son, Adam, four, in Chesterfield, Derbyshire, said: ‘I had a terrible pregnancy and I was extremely worried that I would lose Charlie.

‘Fortunately he clung on and was born two weeks early, a bonny and healthy 8Ib 9oz.’
Her nightmare began in April 2013 when she woke up one morning in excruciating pain. After seeing her GP she was referred to Chesterfield Royal Hospital where doctors said her appendix needed to be removed immediately.
She recalls: ‘The operation seemed straightforward. But a few weeks later I started getting a terrible backache. I couldn’t understand why but thought I must have pulled a muscle.’
A year later she got pregnant and in September 2014 gave birth to son Adam.
‘Following his birth my backache really increased,’ she says, ‘some days it was so severe I even found playing with Adam difficult. It was heartbreaking not to be able to run around with him as other mums do.’
Her GP referred her to hospital for tests. It was then during an MRI scan doctors found the metal hook.
‘When I had my appendix out, it was keyhole surgery. The hook at the end of the surgical instrument had fallen off inside me and no one had noticed.’
She adds: ‘It was an incredible relief to finally know what had been causing my terrible backache. But doctors said they didn’t know how far it had embedded inside me. They said it might be best to leave it where it was as removing it could cause more damage.’
However, Miss Elliott chose to have the hook removed. ‘Some days I could hardly walk and get out of bed. I just wanted to be back to normal.’
The delicate operation to remove the hook took five hours. However, straight after Miss Elliott felt better. She says: ‘Finally I could run. It was fantastic to feel so much better.’
But she was shocked when doctors said scarring inside her abdomen could leave her unable to carry another baby.
‘The hook had been very close to my bowel and uterus. Doctors said if I got pregnant the weight of a baby might be too much for my body to cope with. It was such a blow as I so wanted a sibling for Adam.’
The distressed couple complained to Chesterfield Royal Hospital about the appendix surgery. Says Miss Elliott: ‘Theatre staff are supposed to count all the instruments used in an operation and double check nothing has been left inside a patient. Clearly that hadn’t been done.’
The hospital has since apologised and paid them compensation.
Meanwhile the couple decided to try for a second child. ‘We were both thrilled to find out I was pregnant with Charlie but the pregnancy was fraught with worry. Carrying him was extremely difficult.’ But in August 2017 he arrived safely.
Miss Elliott, who is telling her story to raise awareness about side effects caused by surgical instruments left inside patients after operations,  says due to what’s happened she is unable to have more children. ‘But we are more than happy with our family. We simply feel so incredibly lucky to have our little miracle Charlie.’

Want to sell a story to raise awareness? Contact me for a free no obligation discussion about your real life story >>