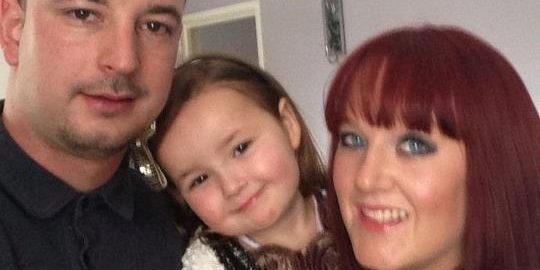 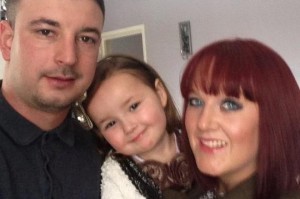 Stuart and Sarah with Lola

When cancer left Sarah Donaghey, 27 unable to carry a baby, she was overjoyed when her mum offered to be a surrogate.

Linda Donaghey, 49, hoped to have IVF using Sarah’s eggs and partner Stuart’s sperm. She then planned to carry her daughter’s baby for her.

But the family’s plans have been cruelly stopped.

Because Stuart already has a child, Lola, from a previous relationship, the local authority have refused to fund the necessary IVF.

And now Sarah, who had a hysterectomy after suffering from cervical cancer fears she will never become a mum.

“When doctors told me I would never give birth to my own child, I thought my world had ended,” says Sarah, a sales administrator, “but then my mum stepped forward and said she would carry her own grandchild and just knowing that gave me the strength to carry on.” 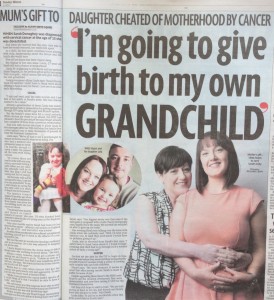 However when the Sarah and Stuart approached their local NHS Trust they were told they did not qualify for IVF because both parents had to be childless.

And although Stuart’s daughter doesn’t live with them, the fact he is a dad disqualified them as a couple.

Says Sarah: “I was shocked because single women can have IVF on the NHS. Yet, although I don’t have any children, I am being persecuted because the man I love does have a child.

“It is as if they are saying, ‘you have to find someone else who doesn’t have a child to have a baby.’ It’s  absolutely devastating.”

Tragically Sarah discovered she had cervical cancer after having her first smear test – which was clear. After experiencing unusual bleeding she went to her GP who referred her for tests. Doctors discovered the cancer had spread to her uterus and she had a life-saving operation to remove it.

Linda, who is separated from her husband, says when her daughter said she would need a surrogate to have a baby, she immediately offered.

“Many people have told me they couldn’t possibly have a baby for someone else, even their own daughter. But I didn’t have to think twice about it,” she says.

The family now face raising £7,000 for one IVF treatment, which they hope will work. But they are in a race against time. Although Linda has been cleared for IVF by doctors, they are reluctant to treat her when she reaches 50 – which she will do later this year.

If you can donate even just a pound, the family would be incredibly grateful! You can donate by going to Sarah’s website here: Help us have a baby!

Meanwhile, Sarah’s story has since appeared on MailOnline with a link to her website and Featureworld is negotiating further publicity for the family to help them raise enough money.

Sell Your Story for charity. Contact us using the form to the right of this page>>>

Category: Daily Mail Stories, Sell my story to the Mirror, Stories sold to newspapersBy Alison Smith-SquireMay 4, 2013
Tags: Cancer storiesFertilityInfertility and IVF stories
Share this post
Share with FacebookShare with TwitterShare with PinterestShare with LinkedInShare with WhatsApp